Pakistan's Voting Record: How Does Pakistan Vote at the United Nations?

Does US aid to Pakistan buy its vote at the UN?

The answer is a resounding NO!!!

India votes at UN with the US more often than Pakistan, according to a Heritage Foundation study of UN votes from 2000 to 2010. 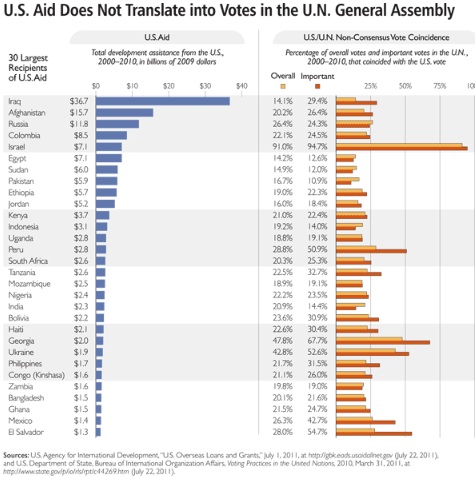 Here's a Dawn report of Wikileaks cable about Pak voting against US positions at the UN:

United States officials expressed grave reservations over the trend of Pakistan’s positions at the United Nations becoming increasingly divergent from those of the Americans and American interests, according to a previously unpublished American diplomatic cable.

According to the cable dated June 6, 2006 and written by John Bolton, former US ambassador to the UN under President George W. Bush and considered a hardliner, Pakistan was “one of a handful of countries…that routinely oppose the United States in multilateral debates despite strong bilateral ties to the US.”

“While much of its behaviour in New York may reflect Pakistan’s rivalry with India…the positions Pakistan adopts to curry favour with other member states often put it in direct opposition to US policies,” wrote Bolton. “A statistical analysis of Pakistan’s voting record at the UNGA [UN General Assembly] illustrates this point. Pakistan’s voting correlation with the US… has been on a downward trend since 1996 and reached a record low of 17.4 percent last year.”

Mr Bolton reserved special censure in the secret cable for Munir Akram, Pakistan’s Permanent Representative to the UN, saying he “personified” Pakistan’s cultivation of “a false image of constructive engagement among other delegations in New York…even while working to block key US priorities.”

Critical of Pakistan’s opposition to US positions on counterterrorism, Mr Bolton states that “Pakistan, which undoubtedly sees counterterrorism at the UN through the prism of Kashmir…has long been a leader among the OIC in opposing US CT [counter-terrorism] positions through indirect criticism of US policies.”

Mr Bolton also notes that by “arguing that attacks perpetrated by peoples living under foreign occupation are not terrorism”, Pakistan has joined Egypt, Venezuela and other NAM states “in emphasizing the need to confront the ‘root causes’ of terrorism.” Speaking of counterterrorism, the cable also brings up a UN session during which insisting on references to “state terrorism”, a “Pakistani delegate” argued that “militaries engaging in foreign occupation often carry out ‘wanton violence against innocent civilians and other non-combatants.’”

Mr Bolton moreover refers to Pakistan’s attempts to persuade the UN’s Economic and Social Council (ECOSOC) and the General Assembly “to adopt positions on development, trade, and social issues at odds with the interests of the US and other like-minded nations.” Criticising Mr Akram for being a behind-the-scenes force “promoting positions inimical to US interests”, Mr Bolton says the Pakistani envoy was actively promoting Islamabad’s “drive to link (unhelpfully, in our view) development assistance into every aspect of the UN`s activities.”

Taking issue with Pakistan’s approaches during the negotiations to establish a Peacebuilding Commission (PBC), Mr Bolton says “Pakistan generally focused on buttressing the influence of the GA and the Asian Group at the expense of the SC [Security Council] and Western interests…rather than engage in constructive efforts to create an effective institution.” He adds that “the Pakistani delegation often resorted to power plays and posturing.”

Pakistani Prime Minister Imran Khan has been the target of the Modi government's cyber attacks, according to a recently released Project Pegasus report.  The Indian government has neither confirmed nor denied the report.  The focus of the report is the use of the Israeli-made spyware by about  a dozen governments to target politicians, journalists and activists. The users of the Pegasus software include governments of  Bahrain, Morocco, Saudi Arabia, India, Mexico, Hungary, Azerbaijan, Togo…

Pakistan has received nearly $30 billion in worker remittances in fiscal year 2020-21, according to the State Bank of Pakistan. This is a new record representing about 10% of the country's gross domestic product (GDP). This money helps the nation cope with its perennial current account deficits. It also provides a lifeline for millions of Pakistani families who use the money to pay for food,…