In 1999, President Pervez Musharraf inherited a massive debt of over 100% of GDP run up by the Pakistan Peoples Party and the Pakistan Muslim League (Nawaz) governments in 1990s. Musharraf's policies not only revived the bankrupt economy but also brought down debt to 52% of GDP by 2007.

In a letter to the International Monetary Fund in 2008, the PPP government hailed Musharraf's economic record without mentioning his name in the following words:

"Pakistan's economy witnessed a major economic transformation in the last decade (2000-2008). The country's real GDP increased from $60 billion to $170 billion, with per capita income rising from under $500 to over $1000 during 2000-07.....the volume of international trade increased from $20 billion to nearly $60 billion. The improved macroeconomic performance enabled Pakistan to re-enter the international capital markets in the mid-2000s. Large capital inflows financed the current account deficit and contributed to an increase in gross official reserves to $14.3 billion at end-June 2007. Buoyant output growth, low inflation, and the government's social policies contributed to a reduction in poverty and improvement in many social indicators". (see MEFP, November 20, 2008, Para 1).

Domestic savings rate reached 18% of the GDP and foreign direct investment (FDI) hit a record level of $5.4 billion in 2007-8. This combination of domestic and foreign investments nearly tripled the size of the economy from $60 billion in 1999 to $170 billion in 2007, according to IMF. Exports nearly tripled from about $7 billion in 1999-2000 to $22 billion in 2007-2008, adding millions of more jobs. Pakistan was lifted from a poor, low-income country with per capita income of just $500 in 1999 to a middle-income country with per capita income exceeding $1000 in 2007.
FDI in Musharraf years came in many sectors, ranging from telecommunications to manufacturing.
Several mobile phone and Internet service operators built networks worth billions of dollars. Without this telecom infrastructure, there would be no tech industry, no freelancers and no fast-growing tech exports today.
New cement plants met growing demand that more than doubled cement consumption, FMCG (fast moving consumer goods) sector took off to meet demand from growing middle class and production of cars and motorcycles jumped.

In addition to the economic revival, Musharraf focused on the social sector as well. Pakistan's Human Development Index (HDI) score grew an average rate of 2.7% per year under President Musharraf from 2000 to 2007, and then its pace slowed to 0.7% per year in 2008 to 2012 under elected politicians, according to the 2013 Human Development Report titled “The Rise of the South: Human Progress in a Diverse World”. 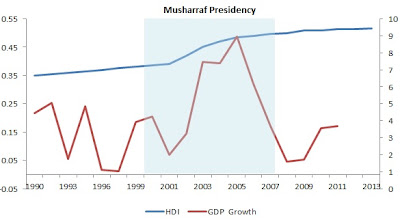 Overall, Pakistan's human development score rose by 18.9% during the Musharraf years and increased just 3.4% under elected leadership since 2008. The news on the human development front got even worse in the last three years, with HDI growth slowing down as low as 0.59% — a paltry average annual increase of under 0.20 per cent. Going further back to the  decade of 1990s when the civilian leadership of the country alternated between PML (N) and PPP,  the increase in Pakistan's HDI was 9.3% from 1990 to 2000, less than half of the HDI gain of 18.9% on Musharraf's watch from 2000 to 2007.


Acceleration of HDI growth during Musharraf years was not an accident.  Not only did Musharraf's policies accelerate economic growth, helped create 13 million new jobs, cut poverty in half and halved the country's total debt burden in the period from 2000 to 2007, his government also ensured significant investment and focus on education and health care. The annual budget for higher education increased from only Rs 500 million in 2000 to Rs 28 billion in 2008, to lay the foundations of the development of a strong knowledge economy, according to former education minister Dr. Ata ur Rehman. Student enrollment in universities increased from 270,000 to 900,000 and the number of universities and degree awarding institutions increased from 57 in 2000 to 137 by 2008. Government R&D spending jumped from 0.1% of GDP in 1999 to 0.7% of GDP in 2007. In 2011, a Pakistani government commission on education found that public funding for education has been cut from 2.5% of GDP in 2007 to just 1.5% - less than the annual subsidy given to the various PSUs including Pakistan Steel and PIA, both of which  continue to sustain huge losses due to patronage-based hiring.

Pakistan experienced rapid economic and human capital growth in years 2000 to 2008 on President Pervez Musharraf's watch. Savings, investments and exports hit new records and the rate of increase in human development reached new highs not seen before or since this period.  Without this human capital, there would be no tech industry, no freelancers and no fast-growing tech exports today.

Pakistan's employment growth was the highest in South Asia region in 2000-2010, followed by Nepal, Bangladesh, India, and Sri Lanka in that order, according to a World Bank report titled "More and Better Jobs in South Asia".

Until 2010, Bangladesh was a laggard in South Asia region. Its per capita income was about half of Pakistan's. Now Bangladesh's per capita GDP is higher than both India's and Pakistan's. What changed? The biggest change is Bangladeshi leader Shaikh Hasina's decision to stifle the unruly Opposition and the media to bring political and economic stability to the South Asian nation of 160 million people. It has eliminated a constant sense of crisis and assured investors and businesses of continuity of government policies. With development taking precedence over democracy, Shaikh Hasina followed the example of Asian Tigers  by focusing on export-led economic growth of her country. She incentivized the export-oriented garment industry and invested in human development. Bangladesh now outperforms India and Pakistan in a whole range of socioeconomic indicators: exports, economic growth, infant mortality rate, primary school enrollment, fertility rate and life expectancy.

Proceeds against Pakistan International Sukuk Bond issuance of $1,000 million were also received in the week.

Pakistan does not produce tea but it is the most popular beverage among Pakistanis.  The country is ranked as its largest importer in the world.  In 2020, Pakistan imported $646 million (9% of global tea imports) worth of tea and exported $15.2 million in branded blends of tea such as Tapal Tea. Pakistan tea imports grew 19.8% from 2019 to 2020. …