The mainstream media and the tech press have noticed the contribution of Pakistani-Americans in the Valley. I was recognized in 1980s by the PC magazine as a person of the year award given to the Intel 80386 microprocessor design team. More recently, there have been positive stories about Pakistani-American entrepreneurs in Forbes and other publications. A Forbes story recently acknowledged that Pakistan is among a dozen countries which are birthplaces of some of the most successful Silicon Valley companies funded by Sequoia Capital, a top venture capital firm credited with early investments in Cisco and Google. Another recent article called Silicon Valley Pakistanis a "model minority". 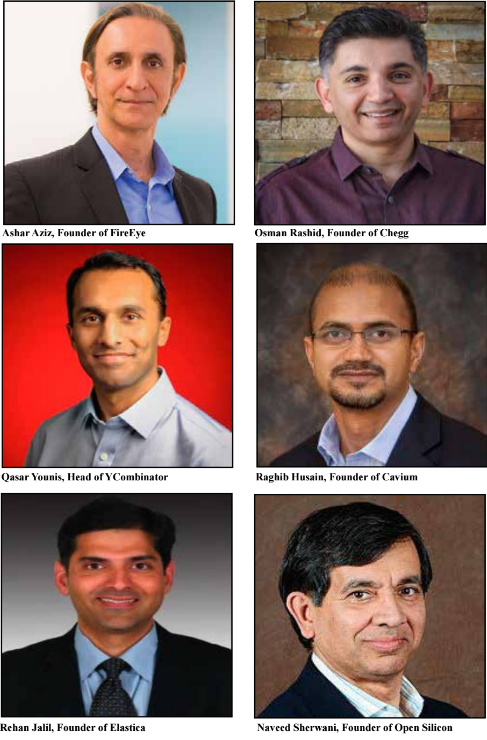 Unfortunately, Pakistan has a serious branding problem in the world. Its name conjures up images of Osama Bin Laden and the Taliban terrorists. This problem has to be addressed by Pakistanis in Pakistan. The Pakistani diaspora, however,  can try and balance the negative coverage by highlighting the good thigs happening in Pakistan. Stories such as a Karachi slum girl going to Harvard, a 12-year-old taking advanced MOOC courses in Lahore, the country's rising urban middle class, and Pakistani diaspora making important contributions in places like the Silicon Valley. I make an effort to do it through my blog Haq's Musings. I hope others will support this effort by sharing it with others.

Here's a video of a recent presentation I made at University of Chicago Booth School of Business on Pakistani-Americans in Silicon Valley:

Talk by Riaz Haq for Pakistan Club Chicago May... by urduonair

Like all things apple, the tech giant’s Apple Pay promises to be a game changer. In this case, iPhone users are now able to securely and privately make swipe-free payments at, to begin with, some 220,000 stores in the U.S. using credit and debit card information stored on their devices. One of the seven men behind this bigger-and-better product is Pakistan’s Ahmer Ali Khan.

Khan, 38, hails from Rawalpindi, graduated from the Ghulam Ishaq Khan Institute of Engineering Sciences and Technology—where friends knew him as The Programmer—and moved to Silicon Valley in 2000. He worked a number of short tech gigs until landing his first full-time job at a startup. On his first day there, Khan was asked if he knew the Java computer language. He didn’t. But he was ambitious and determined. “‘I promise I will know it by tomorrow,’” Raza Shaukat Latif, a friend of Khan’s, recalls him as saying at the time. “Sure enough, he bought a book and crammed the entire night.” By morning, Khan knew the language. “That is just how brilliant he is,” Latif told Newsweek. “He has had the tech bug in him for a very long time.”

It was at the now-defunct ViVOtech, a company specializing in Near Field Communication software, that Khan first tried his hand at building a cellphone-based, contactless payment system. In 2011, Apple picked Khan to work on its “top secret” digital payment system aimed at revolutionizing shopping and, potentially, retail banking.

In February, Khan and six other co-inventors filed their patent for what Apple CEO Tim Cook would unveil to the world on Sept. 9 as Apple Pay. It “will forever change the way all of us buy things,” Cook said at the launch in Cupertino of the new technology, iPhone 6, iPhone 6 Plus and Apple Watch.

Khan lives in Milpitas, California, with his wife and two children. Citing Apple rules, he declined to comment for this piece.

Apple Pay allows a shopper to simply hold his Apple device, an iPhone or the Apple Watch, which comes out next year, to a contactless reader to make payments, which are confirmed as transmitted through a short vibration or beep. Credit and debit cards can be added to the device’s Passbook app using the phone camera. All transactions are entirely secure and private, says Apple.

“With Apple Pay, instead of using your actual credit and debit card numbers when you add your card, a unique Device Account Number is assigned, encrypted and securely stored in the Secure Element, a dedicated chip in iPhone and Apple Watch,” it says. “These numbers are never stored on Apple servers. And when you make a purchase, the Device Account Number alongside a transaction-specific dynamic security code is used to process your payment. So your actual credit or debit card numbers are never shared by Apple with merchants or transmitted with payment.”

In case the device is lost or stolen, banking and other information can be deleted remotely.

Google Wallet preceded Apple Pay but failed to take off and replace plastic. Apple’s recent past is a good indication that with Khan and team’s Apple Pay, it will hit pay dirt.

A new non-partisan study on entrepreneurship gives some credence to the tech industry’s stance that American innovation benefits from robust immigration.

The study from the National Foundation for American Policy, a non-partisan think tank based in Arlington, Va., shows that immigrants started more than half of the current crop of U.S.-based startups valued at $1 billion or more.

These 44 companies, the study says, are collectively valued at $168 billion and create an average of roughly 760 jobs per company in the U.S. The study also estimates that immigrants make up over 70% of key management or product development positions at these companies.

The foundation examined 87 U.S. companies valued at $1 billion or more as of Jan. 1, as tracked by the Journal’s Billion Dollar Startup Club. The authors of the study used public data and information from the companies to create biographies of the founders.

Stuart Anderson, the study’s author and the foundation’s executive director, says the findings show that the U.S. economy could benefit from the talents of foreign-born entrepreneurs even more so if it were easier for them to obtain visas.

Tech leaders including Mark Zuckerberg and Bill Gates have called for increasing the number of H-1B visas that let skilled foreign workers stay in the country. They argue that immigration greatly benefits the tech community, and that it is difficult for companies to hire foreign-born workers and for immigrant entrepreneurs to start businesses due to the visas’ constraints.

Critics argue that tech executives are simply looking for cheaper labor, and some politicians, as well as Republican presidential hopeful Donald Trump, aim to curb the work visa program. A bill introduced by Republican presidential candidate and Sen. Ted Cruz (R., Texas) and Sen. Jeff Sessions (R., Ala.) in December that the lawmakers say aims to reform the H-1B visa program would require petitioners to hold an advanced university degree, have worked at least 10 years overseas and not get paid materially less than U.S. workers.

Either way, the process to secure a visa is lengthy and cumbersome. The visas are capped at 85,000 per year — 65,000 are set aside for foreign workers applying for the first time and 20,000 are for foreign students graduating from American universities. In 2015, the lottery to obtain a visa hit capacity within one week, according to the U.S. Citizenship and Immigration Services. The USCIS said it received nearly 233,000 H-1B petitions during the filing period.

The Ewing Marion Kauffman Foundation, which funded the study, estimated the EB-JOBS Act provision would create 1 million to 3.2 million jobs over 10 years.

According to the study, founders of billion-dollar startups most often hail from India (14), followed by Canada and the U.K., with eight each, then Israel (7) and Germany (4). Two originated from France and the Collison brothers, the co-founders of payments startup Stripe, make up the pair from Ireland.

There are 35,000 Pakistani-born Muslims in San Francisco Bay Area,  or 14% of the 250,000 Muslims who call the Bay Area home, according to the study. Bay Area Muslim community constitutes 3.5 percent of the area’s total population and is one of the highest concentrations of Muslims in the country.

The results of a test called "Supertest", developed by researchers from the US, China, Russia and India,, show that Indian engineering students perform very poorly relative to their  peers in other countries. Supertest is the first study to track the progress of students in computer science and electrical engineering over the course of their studies with regard to their abilities in physics, mathematics and critical thinking and compare the results among four countries.

Can Digital Yuan Challenge US Dollar's Dominance in International Finance?

China's central bank is testing its digital currency in several major Chinese cities. The chairman of US Federal Reserve has recently confirmed that the US Central Bank is working on digital dollar. The State Bank of Pakistan announced in 2019 that it was developing a digital currency. It seems that the popularity of Bitcoin has triggered serious worries of loss of control of the official financial systems among the central bankers around the world. China's substantial lead in digital…