This group is only for those who are associated with NED ELECTRONICS DEPARTMENT in any way. 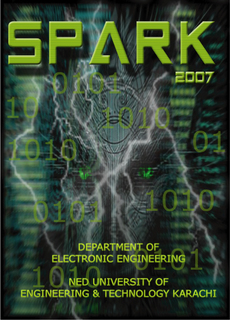 This year NED Electronics Department issued the 1st magazine named Spark. I and my colleague Sumaira have got this honor of being its 1st graphic designers. We hope that this positive trend will continue in our department. If any of you wants its e-copy then feel free to contact me.

CC:
1. Respected President of Pakistan and Governor Sindh for immediate action to save the future of young engineers and premier Institution of Sindh.
2. Respected Dr. Atta-ur-Rehman sahib to stop any PhD funding for NED and cancel bogus PhD degrees.
3. Pakistan Engineering Council, for the with-drawl of recognition of NED University.
4. Different mailing lists and student organizations.

I am writing this email with reference to my earlier email on the same topic [i]. This time I hope that all of you will realize the seriousness of the problems faced by NED and take necessary actions for their rectification. At the same time the concerned authorities should take action against them in the best interest of NED.

Respected VC on your request I am sending this letter directly to you [i], and the rest of the world. I do not think in this age of internet, your friend Mr. Cowasjee (a strong pillar of yellow journalism) can help you. I will take every action to send this letter to the whole world or the High Court should take suo-moto action for playing with the future of the highest quality youth of Pakistan.

NED accepts the best undergraduate students with outstanding academic ranking, yet after four years of education they receive at the University they find themselves struggling with their careers. Graduating students soon realize that their engineering degree has no value or recognition - neither in the industry to help them secure good jobs nor in the academic institutions world over to continue higher education. Following is the charge sheet compiled against the wrong doings.
1. Education:
I recently interviewed around 25 students of NED who recently graduated in Electronics and Computer Engineering, all having above 80% marks including position holders. However, I am sorry to say that none were able to answer the basic questions on:
• State machines,
• Mealy Moore machines,
• Assembly language or
• C language

On further queries they informed that they were not taught these topics in their studies. This is a serious issue, these are the basics of Electrical, Electronics, and Computer Engineering.

I do not know how the university is allowed to give degrees without teaching these basic concepts. Following is the excerpt from PEC's web site: http://www.pec.org.pk/roles-resp.asp

“Functions of The Council
The main functions of the Pakistan Engineering Council are given below:
Promotion of engineering education and review of courses of studies in consultation with the Universities.”

Following was revealed to me by an NED teacher, “The courses followed at NED are very old. Grey heads are conducting 30 year old lectures. One teacher admitted in front of me that the assignment he is giving to me to solve was prepared in 1979. There is no check on the teacher what he teaches. Most of the teachers are not following the latest trends”

I would like to know who is responsible for creating / updating the syllabus in NED?
When was the syllabus last updated?
How many experts were involved in that process outside NED?
2. Research and Development:
The university does not believe on Research and Publications. I remember someone from the university administration mention that publications are not important for a university of NED's caliber. YES, certificate / diploma granting institutions do not require publications, BUT universities ratings are judged based on publications.

My proposal which was rejected by Respected VC (due to lack of understanding / knowledge / personal grudge) was presented to Sir Syed University of Engineering and Technology (SSUET) administration and they whole heartedly accepted the proposal without any modifications. In his letter to HEC dated January 29th, 2008 [see attachment ii], the Respected VC not only bluntly / shamelessly refused the proposal, but used inappropriate language for anyone who comes his way. This letter clearly shows his skill set is inappropriate for a VC of a degree granting university.

By the Grace of Allah, the Research Centre at SSUET has been very successful and has published papers in a very short period of time. Therefore, SSUET rating is now higher than that of NED.
3. PhD degrees without a single publication
When the university can not conduct proper undergraduate studies and there is no research standing of the university, then how can NED offer PhD degrees. The VC accepts that 3 PhDs from the university are working in the university. This shows the standard of NED and its PhD(s). In US, normally universities do not hire their own PhD graduates due to several reasons, which, the Respected VC is not aware of.

On further inquires it was revealed to me that NED is offering a PhD degree without a single publication. The doctoral program of the university has no value as there are no qualified professors who are involved in active research. Even MS students are forced to work under professors who have not published a single research paper in their life.

A PhD scholar requires at least few publications, I know at least one example of a CIS PhD scholar who was cleared in the exam without any publication. I do not know how did the professors analyzed her work, perhaps they did not even know what she was doing in her research work.
2. Qualified Teachers
The number of good teachers is decreasing day by day as VC does not like qualified teachers who raise their voices in front of him. Grey head masters of NED have created an atmosphere, that no foreign qualified faculty is willing to join the university. If they try, they get so much opposition from the bureaucracy that they often choose not to come.
1. NED Website
During the VC tenure, the university is unable to improve its image even through its website.
3. ISO Certification
Why the tax payers money was spent on ISO certification? How many universities in the world have ISO certification. This is an educational institution not shipyard workshop which requires ISO certification. A high level inquiry is needed to find out how much money was spent and who were the people who benefited from this useless exercise.
1. Construction Contracts
There are some University employees, who also have construction companies registered in the University and they often get projects of construction on campus. They approve their own company proposal. I hope the authorities will probe into this matter as well.
4. VC Qualification
a) How can a VC of the university be without a PhD degree, when a PhD is required for an assistant Professor. This immediately disqualifies the VC for his job. I heard the VC Engineering degree is also questionable.

b) Is there a dearth of young talent in Pakistan that 80+ years old person is the VC, when the retiring age in Pakistan is 60 years. There is something seriously wrong and should be corrected immediately.

c) Vice chancellor only follows the recommendation of a few employees of university who stay around him all the time. Who are these people that make all the decisions without consulting from the heads of the concerned departments.

I believe Respected VC is responsible for the degradation of NED's standard. Due to the mis-management of the Respected VC, NED students are refused admissions in the Universities of USA. I would like to know how many NED Alumni were admitted to Stanford, Berkeley, or MIT etc. in the past 3 years. I can give you the answer is zero. Anyone who applies from NED immediately gets rejected even with high GRE or TOEFL scores due its reputation.

Based on the above hard facts:

I request Governor Sindh to take immediate action and save the university.

I request the HEC to immediately stop NED's funding, and hold a high level inquiry to investigate all these matters.

I also request PEC to play its role as mentioned below.
..........
http://www.pec.org.pk/roles-resp.asp
“With-drawl of Recognition

The Council has been assigned the power to withdraw recognition of a qualification in case it is proved that the qualification does not impart knowledge and skill requisite for the efficient practice of engineering.”


http://www.pakistanlink.com/Opinion/2004/Dec04/17/04.htm
“One of the example of such case is that a proposal had been presented by myself for setting up a research center in NED with the help of his friends and companies in the Silicon Valley, USA. The idea was to attract students to conduct research in emerging technologies so that they could keep abreast of changing trends in the high-tech industry. But from the NED University, no reply was received for six months. On his follow-up of the proposal through the Higher Education Commission, he received a lengthy charge sheet from the Vice Chancellor of the NED University through an email message and later through registered mail at his office in California.”

You need to be a member of NED ELECTRONICS DEPARTMENT to add comments!

The results of a test called "Supertest", developed by researchers from the US, China, Russia and India,, show that Indian engineering students perform very poorly relative to their  peers in other countries. Supertest is the first study to track the progress of students in computer science and electrical engineering over the course of their studies with regard to their abilities in physics, mathematics and critical thinking and compare the results among four countries.

Can Digital Yuan Challenge US Dollar's Dominance in International Finance?

China's central bank is testing its digital currency in several major Chinese cities. The chairman of US Federal Reserve has recently confirmed that the US Central Bank is working on digital dollar. The State Bank of Pakistan announced in 2019 that it was developing a digital currency. It seems that the popularity of Bitcoin has triggered serious worries of loss of control of the official financial systems among the central bankers around the world. China's substantial lead in digital…