In 2018, Indian Prime Minister Narendra Modi's right-hand man and home minister Amit Shah told his party's volunteers commonly known as Modi Bhakts: "We can keep making messages go viral, whether they are real or fake, sweet or sour". "Keep making messages go viral. We have already made a WhatsApp group with 32 lakh people in Uttar Pradesh; every morning they are sent a message at 8 am", Shah added, according to a report in Dainik Bhaskar, an Indian Hindi-language daily newspaper.

Amit Shah's advice has been heeded by not only BJP trolls but also many in the Indian mainstream media, including India Today and Republic TV.

After the 2019 aerial battle between Indian Air Force and Pakistan Air Force over Kashmir, India government and media claimed shooting down a Pakistani F-16.  India Today TV anchor Rahul Kanwal invited  Abhijit Aiyar Mitra, an Indian aviation expert, to confirm that the wreckage he was showing as evidence was that of a Pakistani F-16.

Mr. Mitra embarrassed his host on live TV by debunking the claim and correctly stating that Pakistani F-16s are equipped with Pratt and Whitney engines and what the TV host was calling a Pakistani F-16 engine was made by a different manufacturer. Watch it here:

Yaqoob: " "What I got to know from my sources [is that] Serena has only two floors. There are no third, fourth or fifth floors." Watch it here:
https://youtu.be/9ZQ1NttzbZE

India with its massive disinformation campaign against Pakistan, as recently revealed by EU Disinfo Lab, appears to be following what a US think tank RAND calls "Firehose of Falsehood" propaganda model. It has over 750 fake media outlets covering 119 countries. There are over 750 domain names, some in the name of dead people and others using stolen identities. Pakistani policymakers charged with countering the Indian propaganda should read the RAND report "Firehose of Falsehoods" for its 5 specific recommendations to the US government to effectively respond to the Russian disinformation campaign. In particular they should heed its key advice: "All other things being equal, messages received in greater volume and from more sources will be more persuasive.......Don't expect to counter Russia's firehose of falsehood with the squirt gun of truth. Instead, put raincoats on those at whom the firehose is aimed"

Indian TV played footage from a video game claiming it showed Pakistani Air Force activity in Afghanistan. The erroneous footage was the first broadcast on Hasti TV, an Afghan channel based in the UK. There have been several other examples of Indian media getting facts wrong on Pakistani involvement in Afghanistan. Notably, India Today broadcast a fake Tweet showing an image of a downed Pakistani jet. In reality, the image was taken in the US in 2018 and concerned a US Air Force jet.

#US President Biden to #Indian PM #Modi: "The Indian press is much better behaved than the American press...And I think, with your permission, we should not answer questions because they won't ask any questions on point" Modi agreed. #QUAD #Media #Freedom https://youtu.be/scY3O3WM8Mg

Joe Biden: "The Indian press is much better behaved than the American press...And I think, with your permission, we should not answer questions because they won't ask any questions on point"

Modi said he completely agreed with Biden as they began their talks in the Oval Office.

As the two leaders sat down, Biden said: "I think what they're going to do is bring in the press. The Indian press is much better behaved than the American press"

And I think, with your permission, we should not answer questions because they won't ask any questions on point.

Modi said he completely agreed with him.

While the two leaders have met earlier when Biden was the Vice President of the country, this is for the first time that Biden is meeting Modi after he became the 46th president of the US in January.

#Indians are unhappy with #Modi’s treatment in #America !

1. Biden did not receive Modi at the White House porch.

2. US media did not cover Modi's visit. (Imran Khan was on Newsweek cover while Modi was in Washington). 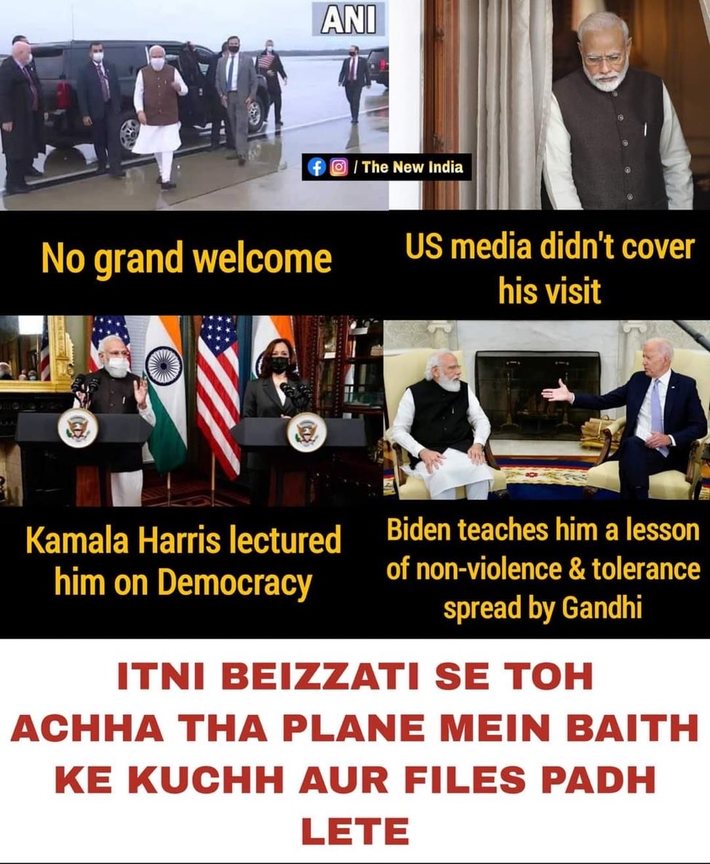 #Trump received #ImranKhan at the White House driveway. #Biden did not bother to come out to receive Modi. #Modi entered through the backdoor. 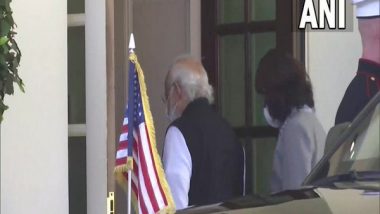 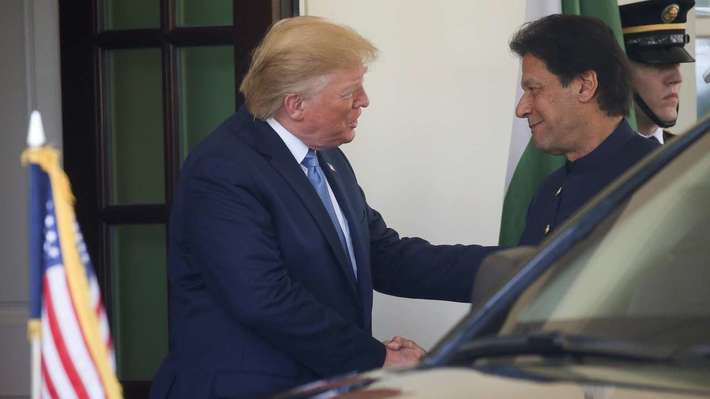 What the likes of Republic TV & Zee News won’t tell you. Modi’s visit was presented as a major world event by #Indian media & huge success but there was barely any mention of #Modi's visit in #US #media except as footnote under #QuadSummit. #GodiMedia https://www.newslaundry.com/2021/09/27/pm-modis-us-visit-what-the-l...

A major world event and a huge success — but only by the Indian media for their audience back home.

The media reactions to the visit and its aftermath followed the usual playbook. Republic TV made it sound like Modi was the only foreign dignitary to speak at the UNGA. Zee News ran with silly stories of “Josh high in Washington,” and breathless accounts of a grand welcome home. Aaj Tak was keen to emphasise how this trip had many firsts. Times Now presented it as a pivotal geopolitical moment.

Some things do not change. Even in 2019, PM Modi’s visit was presented as a major world event and a huge success but only by the Indian media for their audience back home, but it barely registered as a footnote in the US media. Then too, as Shoaib Danyal put it, “jingoism took precedence over factual reporting about the UN session”. There was barely a mention of the Modi visit in the US media save a brief mention in the context of the QUAD meeting, much to the surprise of Aaj Tak anchor Anjana Om Kashyap who tried flicking through a selection of US papers on air to spot coverage of the Modi visit.

Indeed very few Indian media outlets, if any at all, took the trouble to research what the 76th UNGA was about, and what the stand was of the other world leaders who also addressed the General Assembly. A cursory search on Google would have led even a rookie journalist to a wealth of information about the agenda, background papers, and issues before the UN.

Instead they focused exclusively and breathlessly on the 20-minute long address by PM Modi on September 25. The speech itself was as might have been expected. It sounded like a robust and combative defense of the Indian Government’s record in office in the last seven years; set against a backdrop of statements about India as an ancient democratic civilisation that inherently valued diversity, individual freedom, development, trade, openness and peace.

There was the obligatory reference to terrorism, of course, and how a certain neighbour sought to rely on terrorism rather than development to further its political aims.

Speaking in Hindi with instantaneous translation by the UN team into several languages, Modi’s speech at the UN was not the eagerly anticipated address that Indian media channels would have you believe. It was left to social media and Twitter handles to point out the preponderance of vacant seats in the assembly Hall

In the final analysis, it depends very much on the newspaper you read or the TV news you watch to get a feel for how important or influential the Indian PM’s visit to the US was. Perhaps, the truth is somewhere between the breathless fawning coverage of the TV channels that are beholden to the Government for its largesse and the somewhat cynical view expressed in this tweet thread.

Such visits by the head of the country’s government to gatherings of major world leaders are important and necessary, even if not essential — because not to make the effort to travel and be seen would be an own goal. But part of the magic is to manage expectations, say the right things at the right time, but to do so in an understated manner that does not make the audience cynical. But perhaps the most important thing is to be accessible to the world’s press.

This visit to the United States was the 6th by Mr Modi. And while there were many ‘firsts’ that his supporters claimed for it, regrettably it was not the first foreign trip in which the Indian Prime Minister gave a press conference.

Is #Indian press better behaved than the #American press, as #Biden said to #Modi at #WhiteHouse? Fact: "The Indian press is ranked 142nd in the world, according to Reporters Without Borders on press freedom" #ModiInAmerica #ModiBornToDestroyDemocracy https://timesofindia.indiatimes.com/world/us/white-house-defends-bi...

Psaki said: "I think what he (Biden) said is that they (American journalists) are not always “on point.”

From India Today: Pakistan captain Babar Azam and his opening partner Mohammad Rizwan made light work of the 152-run chase, getting to the target in the 18th over to break the World Cup jinx and register their first-ever 10-wicket win in a T20I match.

In India, Facebook Grapples With an Amplified Version of Its Problems
Internal documents show a struggle with misinformation, hate speech and celebrations of violence in the country, the company’s biggest market.

The documents include reports on how bots and fake accounts tied to the country’s ruling party and opposition figures were wreaking havoc on national elections. They also detail how a plan championed by Mark Zuckerberg, Facebook’s chief executive, to focus on “meaningful social interactions,” or exchanges between friends and family, was leading to more misinformation in India, particularly during the pandemic.

DC Comics latest movie release "Injustice" is inspired by a video game titled "Injustice: God Among Us". It shows superheroes destroying military equipment in Indian Occupied Kashmir with the narrator's voice saying that Superman is stopping a government "waging a genocidal war against its own people.”…

Pakistan's Quarterly Tech Exports Have Jumped Over 6-Fold Since 2010