Fellow member Ameer Alam posted a photo of the Time Magazine cover from 1946 that carries Quaid-e-Azam's picture on the cover. The following is the article inside that issue of Time:

By every sign & portent this would be India's year of decision—a decision that would be bitterly contested by all three partners to India's future: the British Raj, 256 million Hindus, 92 million Moslems.

Votes & Issues. As the year opened, Secretary of State for India Lord Pethick-Lawrence dutifully reiterated Britain's old promise: she would do all she could to help India reach Dominion status. For over three years, in one form or another, Britain had been offering just that—postwar independence inside the Empire (i.e., Dominion status), provided Indians could agree among themselves on what form of self-rule they wanted. Hindus wanted a united, free India; Moslems wanted a separate state for themselves (Pakistan) inside a free India. Both Hindus and Moslems wanted the British to get out.

Last week the results of the first election in eleven years for the Central Legislative Assembly were announced. Because of franchise restrictions, which made them among the least representative of India's elections, only about 600,000 voted. In this preliminary test, the predominantly Hindu Congress Party won all the non-Moslem seats (56) and the Moslem League won all the Moslem seats (30); minor groups won 16, with 39 members still to be nominated.

Words & Moods. In the far more significant provincial elections (30,000,000 voters), to be held between January and April, the issue will be Pakistan—whether or not to slice off the four predominantly Moslem provinces in India's northwest corner, plus Bengal and Assam in the east, as a separate Moslem land.

The Moslem League's shrewd, elegant President Mohamed AH Jinnah put it coolly: "India has never been a nation. It only looks that way on a map. ... I want to eat the cow the Hindu worships. When the Hindu shakes hands with me, he must go wash his hands. Our religion is not all. Culture, history, customs, all make Moslem India a different nation from Hindu India. The Moslem has nothing in common with the Hindu except his slavery to the British."

The Congress Party's grim, potent boss, Sardar Vallabhbhai Patel, who hates Jinnah almost as much as he does the British, was openly scornful of both. The Moslem League, he said, had won electoral advantages during the war by stooping to aid Britain. "Do I think the British are sincere," he asked, "in their promise to leave India? They have been making promises ever since Queen Victoria's time, and they have always broken them."

While Hindus and Moslems were snarling at each other, Jawaharlal Nehru, ardent champion of Indian independence, summed up for them and for the world India's New Year's mood: "[We] will not willingly submit to any empire or any domination, and will revolt against it. It will be a continuing revolt of millions, with a passion behind it which even the atomic bomb will not suppress." 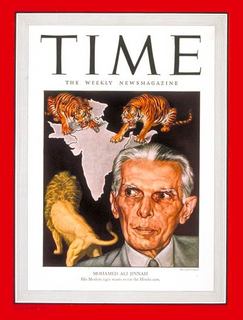