New York's Jewish-American Congressman Anthony Weiner's scandal has brought unwanted attention to his wife Huma Abedin, a 34 year-old Michigan-born Muslim-American woman with an Indian-American father and a Pakistani-American mother. The Congressman is alleged to have sent a lewd photo of his crotch from his Twitter account to a 21-year-old female student in Seattle, Washington. 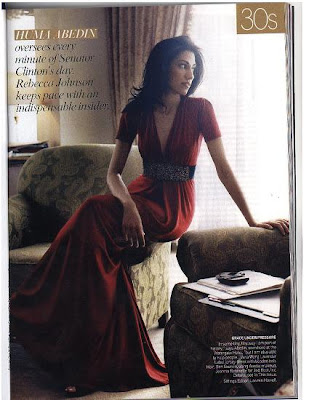 A graduate of George Washington University, Huma Abedin has been a close aide to Secretary of State Hilary Rodham Clinton since 1996 when she was an intern in the White House and saw the Monica Lewinsky scandal from a front-row seat. President Bill Clinton officiated at her wedding in July 2010.

Abedin's father was of Indian descent and was an Iranian scholar who died when she was 17 years old, and her Pakistani born mother is currently a university professor in Saudi Arabia. 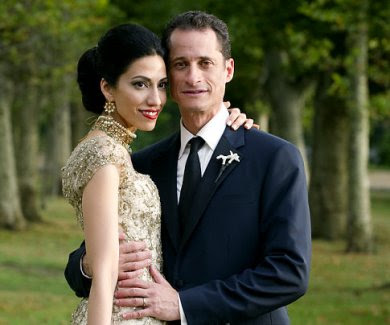 As the American and the British tabloid and mainstream media appear to be having a field day covering the scandal, Abedin has returned to work as poised and unfaltering as ever, according to The Daily Mail.

Here is Anthony Weiner at a recent Congressional Correspondents Dinner proclaiming "I do the Weiner jokes around here":

Is Pakistan Too Big to Fail?

Their marriage has become the subject of intense speculation and scrutiny amid an embarrassing online sex scandal.

Now, Representative Anthony D. Weiner and Huma Abedin are about to make news of a different kind: they are expecting their first child.

Ms. Abedin, 35, is in the early stages of pregnancy, according to three people with knowledge of the situation.

The pregnancy, which the couple have disclosed to close friends and family, adds a new dimension to questions about the future of their marriage.

Mr. Weiner, 46, has admitted to engaging in salacious online conversations with at least six women over the last few years, including an incident last month in which he sent a photograph of himself in underwear to a college student in Washington state. He apologized to his wife and declared that they have no intention of splitting up.

“We will weather this,” Mr. Weiner said on Monday, during his emotional news conference. “I love her very much, and she loves me.”

But Ms. Abedin, a longtime aide to Hillary Rodham Clinton, has remained silent about the topic as she keeps up a hectic schedule at the State Department.

Ms. Abedin returned to work this week and departed on Wednesday for a trip to northern Africa with Ms. Clinton.

New Delhi, 19 July 2015: Her boss is leading in the race for next US president, so is she, but on another front. Daughter of alumnus and former lecturer of Aligarh Muslim University, Huma Abedin is the highest paid staffer in US presidential campaign as she takes home an annual salary of more than USD 277,000 from Hillary Clinton Campaign. Huma's mother was from Pakistan.

According to the latest quarterly financial figures submitted by the Clinton Campaign to Federal Election Commission this week, Huma Abedin was paid USD 69,263.09 in the first quarter. At this rate, her annual pay check is pegged at USD 2,77,052. John Podesta, the chairman of the Clinton campaign received only USD 3,586, while Robby Mook, the campaign manager, got USD 27,625; Jennifer Palmieri, the communications director, received USD 31,710 during the first quarter of the campaign.

Married to former New York Congressman Anthony Weiner, Huma is currently the vice chair of the campaign -- Hillary for America.

Her late father, Syed Zainul Abedin, was a graduate of Aligarh Muslim University and a university lecturer and her mother, a Pakistani national, was a sociology professor. Both received their PhD’s from the University of Pennsylvania.

Huma was born in Kalamazoo, Michigan but grown up in Jeddah, Saudi Arabia. She speaks fluent Arabic.

Graduated from George Washington University, Huma, 39, had longed to be a journalist, and that’s why when she first joined the Clinton White House in the 1990s, she hoped to be assigned to the press office.

“Bill and Hillary Clinton have been the sun of Abedin’s solar system ever since she joined the White House as an intern at age 21,” says Fortune.

An ad released on Monday from a pro-Trump group attacked Hillary Clinton aide Huma Abedin for her Pakistani heritage.

In the ad, produced by the Republican Hindu Coalition, a narrator leveled attacks at Clinton before taking aim at Abedin.

"Her current aide Huma Abedin is of Pakistani origin and will become chief of staff if she wins," the narrator said.

Abedin's mother is Pakistani, born in a part of the former British India that is now Pakistan. There has been no word beyond speculation that Abedin would be chief of staff in a Clinton administration.

According to the New York Post, the ad will air on more than a dozen TV stations in the US, including several catered to Indian viewers.

The group was also sending 60,000 advertisements by mail to voters in three key swing states — Florida, Ohio, and North Carolina, the Post reported.

The ads reportedly stated: "Chief of Staff in Clinton White House will be Huma Abedin, of Pakistani and Saudi background," an apparent reference to Abedin spending much of her childhood in Saudi Arabia. Abedin was born in Michigan.

The FBI has started reviewing some 650,000 emails found on a laptop belonging to Abedin's estranged husband, former Congressman Anthony Weiner, that may be related to the investigation into Clinton's use of a private email server.