What is the global impact of COVID19 pandemic? How has it affected the United States? How is Prime Minister Imran Khan handling the coronavirus crisis in Pakistan? Are complete lockdowns absolutely necessary to contain the spread of coronavirus?

Has President Trump's handling of the COVID pandemic and its devastating economic impact hurt his re-election chances?  Who is better for Pakistan? Biden or Trump? Was President Obama's hostility toward Pakistan shared by Joe Biden who served as his vice president from 2009 to 2017? Why did Biden say "Pakistan is 50 times more important to US than Afghanistan"?

Have Prime Minister Modi's policies backfired? Why has Modi not succeeded in isolating Pakistan? Why do almost all of India's neighbors from China to Nepal to Pakistan have problems with India? Why is Modi under India so isolated? Why has President Trump not strongly backed India in Ladakh?

Can India Afford to Boycott China?

Has Modi Succeeded in Isolating Pakistan?

Coronavirus, Lives and Livelihoods in Pakistan 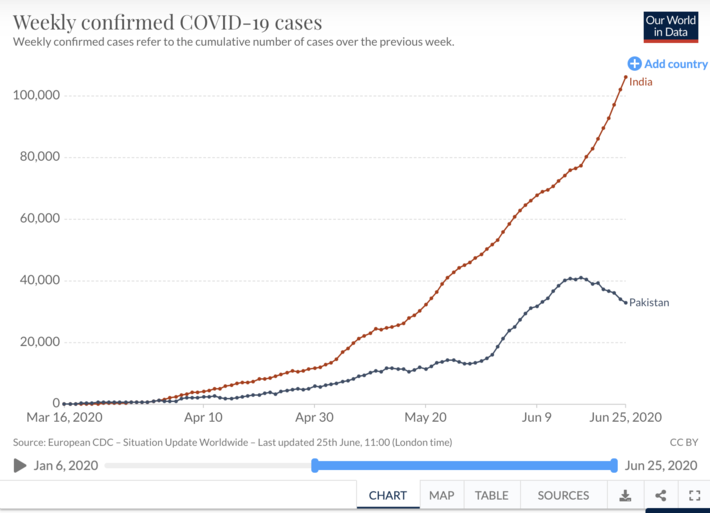 #Pakistan central bank governor says #coronavirus lockdowns are a ‘luxury of the rich’. #COVID19 #pandemic is a public #health crisis and until it’s addressed, there will most likely be #economic hardships ahead, State Bank Governor Reza Baqir told CNBC. https://www.cnbc.com/2020/07/02/pakistan-central-bank-governor-on-e...|twitter&par=sharebar

The coronavirus pandemic is a public health crisis and until that’s addressed, difficulties on the economic front should be expected, Pakistan’s central bank governor Reza Baqir said.
Pakistan has reported more than 213,000 cases of infection and more than 4,300 people have died.
Prime Minister Imran Khan’s government lifted a two-month-long lockdown in early May, few weeks before an important festival, and as millions struggled in light of drastically reduced economic activity.

“We are very concerned. First and foremost, this is a public health crisis — we have to remind ourselves of that,” Reza Baqir said on CNBC’s “Street Signs Asia” on Wednesday.

“And, only on a secondary basis, then it becomes an economic crisis. Until the public health crisis is addressed, we should continue to expect challenges on the economic front,” he added.

Prime Minister Imran Khan’s government lifted a two-month-long lockdown in early May, a few weeks before an important festival.

As millions were struggling with starvation during that time of drastically reduced economic activity, the country’s Covid-19 cases surged once the lockdown was eased, Reuters reported.


The foreign exchange reserves held by the central bank increased 12.75% on a weekly basis, according to data released by the State Bank of Pakistan (SBP) on Thursday.
On June 26, the foreign currency reserves held by the SBP were recorded at $11,231 million, up $1,270 million compared with $9,961.2 million in the previous week.

During the current week, the SBP has received an additional $1,000 million as government of Pakistan loan disbursement from China. These funds will be part of SBP’s weekly reserves data as of July 3, 2020 to be released on July 9, 2020.

Pakistan received the first loan tranche of $991.4 million from the International Monetary Fund (IMF) on July 9 last year, which helped bolster the reserves. In late December, the IMF released the second loan tranche of around $454 million.

Previously, the reserves jumped on account of $2.5 billion in inflows from China.

A few months ago, the SBP successfully made foreign debt repayment of over $1 billion on the maturity of Sukuk.

In December 2019, the foreign exchange reserves surpassed the $10-billion mark owing to inflows from multilateral lenders including $1.3 billion from the Asian Development Bank.

Foreign investment of over $3 billion in the debt market in the previous fiscal year also played an important role in the growing foreign currency reserves.

Earlier, the reserves had spiralled downwards, falling below the $7-billion mark, which raised concern over Pakistan’s ability to meet its financing requirements. However, financial assistance from the United Arab Emirates (UAE), Saudi Arabia and other friendly nations helped shore up the foreign exchange reserves.

The Federal Board of Revenue (FBR) collected Rs3,957 billion during the fiscal year 2019-20, which was Rs50 billion more than the revised target of Rs3,907 billion.

According to the FBR spokesperson, the department collected Rs411 billion in June 2020, as against the target Rs398 billion. “The FBR managed to collect Rs4 trillion gross revenue for the first time in the country’s history, which is commendable,” he added.

It is pertinent to mention that the government had originally set the FY20 revenue target at Rs5.55 trillion. However, it was revised downward after the first review of Pakistan’s economy by the International Monetary Fund (IMF).

Meanwhile, following the second review by the IMF in February this year, the collection target was further revised downwards to Rs4.80 trillion.

As coronavirus had crippled the country’s economy post March 2020, the revenue target was again revised to Rs3,907billion.

It may be noted that during the last year, former FBR chairman Shabbar Ziadi had gone on indefinite leave due to bad health and did not return to the office. The government had then appointed Nausheen Javed Amjad, a grade-22 officer of Inland Revenue Service, as FBR chairperson in May this year.