Contrary to the Indian and western media hype about Modi-nomics, it was recently reported that unemployment rate in India has reached its highest in 45 years. Indian GDP growth figures have been challenged as too optimistic by top Indian and western economists. Modi's demonetization has turned out to be a major disaster for India's largely cash-based economy. Farmers are continuing to take their own lives by the thousands each year as the agrarian crisis continues to take its toll. India's community fabric has been fraying with sharp spike in social hostilities against minorities. 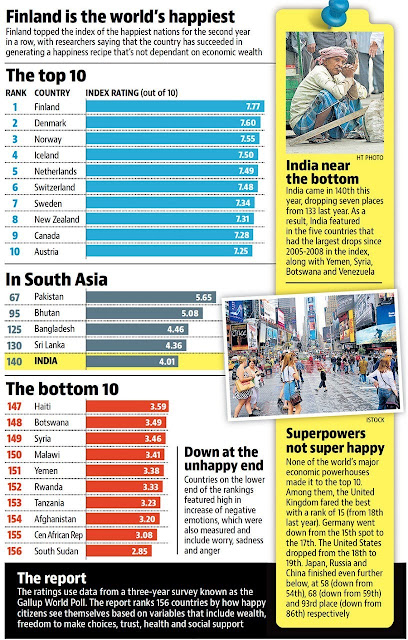 Indian Prime Minister Modi has been accused by his critics of stoking tensions with Pakistan ahead of this year's general elections to divert attention from his government's poor performance.  Some analysts believe that recent Indian airstrikes in Pakistan have helped bolster Modi's domestic support among his among his right-wing Hindu Nationalists base.

While Modi may have made domestic political gains, India's international perception as a "great power rising" has suffered a serious setback as a result of its recent military failures against Pakistan.  Pakistan spends only a sixth of India's military budget and ranks 17th in the world, far below India ranking 4th by globalfirepower.com.

Is India a "Paper Elephant"?

Comment by Riaz Haq on March 23, 2019 at 4:17pm
The World Happiness Report  combines  quantitative data  --  such as per capita GDP growth  --  and qualitative data, such as social support, freedom to make life choices, and perceptions of corruption , to rank 156 countries.
https://www.forbes.com/sites/panosmourdoukoutas/2019/03/23/pakistan...
Pakistan's big edge in the happiness ranking over India may come as a surprise to some emerging market observers. India’s economy has been outperforming Pakistan’s in a number of metrics, like world competitiveness, GDP size and growth, and inflation rates - see table.
Besides, India is a democracy that has yet to be interrupted by military coups.
Pakistan’s, India’s Key Metrics (2018
Tradingeconomics.com 3/22/19
So, what have Pakistanis done better than Indians in the pursuit of happiness?
It’s hard to say. Most of the variables included in the calculations are qualitative, and therefore, prone to specification and measurement errors.
Still ,  the gap between the rankings of the two countries is too big to be ignored.
“It must be other metrics, like income inequality and poverty,” says Udayan Roy, Professor of Economics at LIU POST. “That’s matters more than per capita GDP when it comes to well-being of the masses.”
Indeed, the rich are getting richer in India while the poor are getting poorer.
Over the last four decades, India’s top 1% earners’ share of the country’s income rose from roughly 7% to 22%, as of 2014.  Meanwhile, the income share of the bottom 50% earners declined from roughly 23% in the early 1980s to 15% in 2014.
That’s according to 2018 World Inequality Report, which compiles data from the 1950s to 2014.
Meanwhile, India’s income inequality is much higher than that of both Pakistan, and Bangladesh, as measured by the Gini coefficient of income inequality.
That’s according to Standardized World Income Inequality data.
Meanwhile, poverty rates are higher in India than they are in Pakistan and Bangladesh, according to World Bank.
Then there’s “vulnerable employment”— employment in unpaid family activities—which is much higher in India than in Pakistan and Bangladesh.
Wait, there’s more. There’s economic freedom.
Published  by the Heritage Foundation, the Economic Freedom report measures such things as trade freedom, business freedom, investment freedom, and the degree of property rights protection in 186 countries.
Though the two countries have ranked closely in the last couple of years, Pakistan’s ranking has  consistently beaten  India's over longer periods.
In fact, a closer look at the ranking components of the two countries reveals that Pakistan has fared better than India in the area of government spending, which matter a great deal when it comes to providing on welfare programs.

For at least six decades, scholars and policy makers have been aware of the strain placed by India’s feudal system of corporate governance on capital formation, job creation and growth. Yet the last major reform was in 1969, which ironically was also when India was nationalizing banks and lurching toward a more virulent socialism. Subsequently, globalization caught up with India, the economy opened up and attracted hundreds of billion dollars in foreign capital, but the foundations of corporate structure stayed weak. It’s only now, when the edifice is showing cracks, that it’s becoming clear a fresh coat of paint alone won’t suffice.

Back in the 1960s, “managing agencies” dominated India’s industrial landscape. The 70 companies in the Tata Group were run by nine agencies, while 49 firms in the Birla Group were managed by 13. Such was the sway of the “boxwallahs,” as the agents were pejoratively referred to, that State Bank of India wouldn’t lend to an operating company without its managing agency’s guarantee. Nevermind that a majority of these proxy controllers didn’t even have 1 million rupees in capital of their own. They were vehicles for business families to extract commissions and control empires in the garb of providing managerial expertise.

Andrew Yule, Martin Burn, W.H. Brady and MacNeill & Barry. As the names suggest, the managing agencies started out as part of the British colonial project, but about a hundred years ago ownership started to pass into Indian hands. The world wars and India’s 1947 independence hastened the switch. India eventually outlawed managing agencies in 1969, but entrenched families lost no time in gaming the corporate boards that were now in charge.

Explicit recognition of some shareholders as “promoters” has perpetuated their exorbitant privilege, and infected even firms of a newer vintage. The co-founders of Mindtree Ltd., a mid-bracket software services company, didn’t show any urgency when a large investor warned them of his intention to cash out. Now that the investor has sold to engineering firm Larsen & Toubro Ltd., the insiders are shocked, shocked that L&T is out to “decimate” Mindtree with a $1.6 billion hostile takeover.

Mindtree founders are first-generation entrepreneurs. You can imagine the sense of entitlement that may be felt by the more pedigreed families that control 60 percent of the assets of publicly traded companies. In the 1970s, William Meckling and Michael Jensen studied the friction between managers and a diffuse U.S.-style shareholder base, whereas in Asia, the main issue is concentrated ownership and expropriation by insiders whose political connections get them bank loans.

A bank-dominated financial system hasn’t just saddled India with more than $200 billion in bad loans; it’s also been the bane of governance. Recently, Indian banks did an out-of-court settlement in Sterling Biotech Ltd., taking a 65 percent haircut while handing back control to the same promoters who’ve left India and are facing charges of money-laundering.

"Despite official figures #India’s economy slowed sharply due to #Modi's mis-steps while promised #jobs and #investments have not materialized...India has gone backwards under him. He is lying about the #GDP numbers....#Indian MBAs are working as waiters" https://www.ft.com/content/14baecba-56c5-11e9-91f9-b6515a54c5b1

Mr Modi swept to power in New Delhi in 2014, pledging to bring acche din, or good times, for India, with accelerated economic growth and millions of new jobs. But his record of delivery on these promises is highly contentious.

The prime minister insists India’s economy has grown faster under his leadership than ever before, with an average annual GDP growth of 7.3 per cent, compared with an annual average of 6.7 per cent under the previous Congress-led government. But many economists have questioned the credibility of official data, amid perceptions of unprecedented political interference. Even by New Delhi’s own numbers, India’s GDP growth slowed to 6.6 per cent in the three months ending December 31, its slowest pace in five quarters.

New Delhi has also suppressed a major report which apparently indicated rising joblessness among youth. In a Pew Research Center survey of 2,521 Indians last summer, 76 per cent cited lack of employment opportunities as a major concern. “The gap between the hype and the promises was clearly wide and clearly visible,” Mr Varshney says.

Farmers have been squeezed hard as part of the effort to curb once rampant inflation, their anger displayed in a series of large-scale protests. “We are very unhappy”, says Lakshman Ram, a 61-year-old farmer at the Jodhpur spice market, where he was selling a mound of fragrant cumin seeds to traders. “He has killed us farmers. He has finished us. I’m just waiting for Congress — they think about us.”

The Zomato and Swiggy delivery boys, however, brim with enthusiasm for Mr Modi, especially his recent authorisation of a missile strike on an alleged terrorist training camp in neighbouring Pakistan. Their excitement is mirrored by Akshay Bhati, 25, whose father supplies milk to the shop.

“The power of the nation has gone up,” the younger Mr Bhati says. “Before, any enemy country would come and attack India and just get away with it — India would not do anything. Now, we will enter your house and kill you.”

The divergent views among the evening crowd at Pokar’s reflects the deep faultlines among India’s 900m eligible voters, as they gear up for what has become an unusually personality-driven general election contest. The voting will serve as a national assessment of how well the charismatic populist Mr Modi has lived up to the high expectations he raised of a “New India”, when he took power in 2014 after 10 years of disappointing rule by the Congress party.

----
The premier’s Bharatiya Janata party, with its deep pockets and sophisticated political machinery, is urging India’s voters to give Mr Modi another five years in power to continue his efforts to remake India.

Fragmented opposition parties — including the BJP’s arch-rival Congress, led by Rahul Gandhi, and a diverse array of smaller regional parties — are trying to counter by accusing Mr Modi of failing to live up to expectations, and inflicting unnecessary misery on the population, while simultaneously taking potshots at one another. Results will be known only on May 23, as voting is spread over six weeks.

“It is undoubtedly a referendum on Mr Modi,” says Ashutosh Varshney, director of the Center for Contemporary South Asia at Brown University, of the contest. “It’s a very presidential style election.”

It comes off as a true surprise when we witness Pakistan performing better than its neighbouring counterpart on the "World Happiness" forum. Quite imperatively, this better ranking could only have been achieved via much higher scores in nearly all social sectors encompassing the general population. Taking into acccount Pakistan's performance among the South Asian countries, it certainly runs better than the rest of the members, topping the happiness ratio. It becomes quite evident that despite being a much bigger economy and a global market niche, the Indian society just couldn't translate its better economic conditions into a happier, contended populace. One might argue that the Indian peninsula is vast in its land area as well as its population types and density distribution that have all combined to contribute to its lower-than-expected happiness figures. True enough, but then this assumption points to its another negative aspect --- the inequal distribution of resources and opportunities among its living classes of citizens. All in all, even a higher GDP growth, dollar reserves, military personnel and arsenal and a much larger world market, it is the global gauge now that is speaking lowly of its happiness extent. They need to buck up if they intend to lie any closer to us.

I have gathered some information from the internet