India-Pakistan Nuclear Standoff: What Does the West Have at Stake in South Asia?

The West, particularly the United States and Canada, are geographically far removed from South Asia. This distance makes many think that any nuclear exchange between India and Pakistan would not have a significant impact on life in America and Europe. Dr. Owen Brian Toon and Professor Alan Robock dispute this thinking. They believe the nuclear winter following an India-Pakistan nuclear exchange will kill crops as far as the United States and cause a global famine. Another study by Nobel Peace Prize- winning International Physicians for the Prevention of Nuclear War and Physicians for Social Responsibility reached the same conclusion. 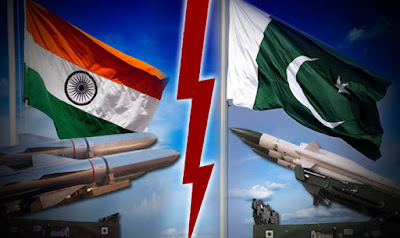 Professors Robock and Toon have calculated that the smoke from just 100-200 Hiroshima sized atomic bombs exploding in South Asia would cover the entire globe within two weeks. This smoke would hang 30-50 miles above the surface of the earth where it never rains. This thick layer of smoke would block the sun causing farmers to lose their crops for years to come. The resulting famine would kill billions of people around the globe.

It seems that the American leadership recognizes the devastating global impact of possible India-Pakistan nuclear war.  In "Brokering Peace in Nuclear Environments U.S. Crisis Management in S...", Pakistani-American analyst Dr. Moeed Yusuf talks about the US efforts to prevent India-Pakistan war that could escalate into a full-scale nuclear exchange. He analyzes American diplomacy in three critical periods: Kargil conflict in 1999; the stand-off after the Indian Parliament attack in 2001 and the terrorist attack in Mumbai in 2008.

Yusuf argues that the US-Soviet Cold War deterrence model does not apply to the India-Pakistan conflict and offers his theory of "brokered bargaining". In chapters that detail the US role during three India-Pakistan crises, it is clear that the US rejected India's insistence on bilateralism in resolving India-Pakistan disputes.  The author says that "in each episode, the concern about the escalation forced the United States to engage, largely unsolicited, and use a mix of rewards (or promises of) and punishments (or threats of) with the regional rivals to achieve de-escalation--ahead of its broader regional or policy interests."

1. US-Pakistan relations: Yusuf says Washington now sees India, not Pakistan, as its strategic partner in South Asia. Washington's entire relationship with Islamabad today revolves almost exclusively around Afghanistan where American and Pakistani interests do not converge. The only time the United States gets involved in India-Pakistan conflict is when there is a serious crisis that the world fears could escalate into a nuclear confrontation between them.

2. India-Pakistan Ties: There is no sustained dialogue between New Delhi and Islamabad to resolve issues such as Kashmir between the two neighbors. Yusuf speculates that India wants to wait it out for the time when its economic and military differential with Pakistan becomes so large that Delhi can dictate terms to Islamabad as the unchallenged regional hegemon.

3. Afghanistan War: Pakistan does not believe that the Afghan Taliban can be militarily defeated and insists that the United States must talk directly with them to reach a political settlement.  Yusuf now believes that the recent start of direct dialogue between the United States and the Taliban may bring an eventual end to America's longest war.

Here is a TED talk by Dr. Owen Brian Toon, professor of atmospheric and ocean sciences at University of Colorado at Boulder. He's citing research he did with Professor Alan Robock, professor of climate research at Rutgers University.

US and China Vying For Influence in Pakistan

#Pakistan’s interests to be ensured in #Afghanistan. Centcom Gen Votel.“As a state possessing nuclear weapons that sits at the nexus of #Russian, #Chinese, #Indian, #Iranian, #US geopolitical interests, Pakistan will always retain its importance to the US” https://tribune.com.pk/story/1906194/1-pakistan-will-always-importa...

As bilateral relations between Islamabad and Washington remain cold, a top Pentagon official earlier this week reiterated that Pakistan will always be a “country of importance” for the United States.

Commander of US Central Command General Joseph Votel, while testifying before the Senate Armed Services Committee, said “as a state possessing nuclear weapons that sits at the nexus of Russian, Chinese, Indian, Iranian, and US geopolitical interests, Pakistan will always retain its importance to the US”.

Votel added that any agreement for resolving the now 17-year-old conflict in landlocked Afghanistan would ensure Pakistan’s ‘equities’.

In light of recent efforts between Pakistan, the US, and Afghanistan to hold talks with the Taliban, the top US military official commended Pakistan’s efforts and cooperation with the State Department’s Special Representative for Afghanistan Reconciliation Zalmay Khalilzad.

“If Pakistan plays a positive role in achieving a settlement to the conflict in Afghanistan, the US will have opportunity and motive to help Pakistan fulfill that role, as peace in the region is the most important mutual priority for the U.S. and Pakistan”.

The CENTCOM chief also identified Afghanistan’s uncertain political situation as the greatest risk to stability in the region and said the US looks to Pakistan among others to play a constructive role in achieving peace in Afghanistan and the greater South Asian region.

“Our posture with Pakistan involves supporting our colleagues at the Department of State as they pursue a diplomatic solution with Islamabad to end the conflict in Afghanistan while ensuring that Pakistan’s equities are acknowledged and addressed in any future agreement.”

He also addressed the issue of violent and extremist organisations, as designated by the US and the UN, and their operations in “safe havens in both Afghanistan and Pakistan”.

“Pakistan has not taken concrete actions against the safe havens of VEOs inside its borders. Similarly, VEOs located in Afghanistan conduct attacks inside Pakistan. This cross-border instability and violence generate tension along both sides of the border,” claimed Votel during the Senate briefing.

No timetable for US withdrawal from Afghanistan, asserts Khalilzad

During recent rounds of negotiations between the Afghan Taliban and stakeholders of peace in the war-torn country, President Ashraf Ghani is being pushed to the sidelines as the Taliban ignore his overtures for peace and negotiate instead with his friends, and enemies, over the future of Afghanistan.

Pakistan's Ministry of Foreign Affairs condemned Thursday's violence and denied involvement. "We strongly reject any insinuation by elements in [the] Indian government and media circles that seek to link the attack to [the] State of Pakistan without investigations," ministry spokesperson Mohammad Faisal said.

A senior leader of Pakistan's ruling party said the bombing was the result of "brutalities of Indian occupied forces in Kashmir," and that India's allegations were part of a political campaign as the country's general elections near, according to The Associated Press.

For decades, Washington has maintained a delicate balancing act in South Asia, relying on cooperation from Pakistan to crack down on terrorism while trying to engage more with an economically emergent India.

The U.S. embassy in India has called on Pakistan to stop supporting terrorist groups that operate on its soil. "This attack only strengthens our resolve to bolster counterterrorism cooperation and coordination between the United States and India," the embassy said.

But Moeed Yusuf, associate vice president at the United States Institute of Peace's Asia Center, tells NPR from Islamabad that India will "most likely end up frustrated" with the United States. "The U.S. and Pakistan are working too closely on finding a solution in Afghanistan for the U.S. to come down hard on Pakistan," he says.

Rhetoric on both sides will be ratcheted up, he says, but military escalation is unlikely for the nuclear-armed neighbors. "India risks being counterattacked, and if it does, in a nuclear environment, you're going to have the world descend upon India and Pakistan to push them to de-escalate tensions."

As for Adil Ahmad Dar, Thursday's alleged suicide bomber, he appears to have nursed resentment for troops in the region.

"He was beaten by Indian troops a few years back when he was returning from school," his mother, Fahmeeda Dar, told Reuters. "This led to anger in him against Indian troops."

She said one day in March 2018, her son didn't come back from work. The family stopped searching for him after three months, she said. "Finally we gave up efforts to bring him back home."

"One hard truth that Indians have to contend with is that America has also had difficulty treating India with respect", writes former Singaporean diplomat Kishore Mahbubani in his latest book "Has China Won?". "If America wants to develop a close long-term relationship with India over the long run, it needs to confront the deep roots of its relative lack of respect for India",…