The PPP-led Sindh government is granting over 212,864 acres of government-owned agriculture land to landless peasants in the province.

Over half of the farm land being given is prime nehri (land irrigated by canals) farm land. About 70 percent of the 5,800 beneficiaries of this gift are women. Other provincial governments, especially the Punjab government have also announced land allotment for women, for which initial surveys are underway, according to ActionAid Pakistan.

The land is high-risk government land that runs alongside rivers and tributaries. It was previously designated as government-owned flood runoff, but was used by local landlords.

The initiative includes various RSPs (Rural Support Programs) to develop support packages for availability of water and other inputs such as seed and fertilizer. Depending on geographic contiguity, the beneficiaries will be organized in cooperative mode for enabling them to access agricultural implements, farm machinery and micro credit on collective basis. The government will provide support for at least a period of two years through an institutional support mechanism for enabling each household to move to a level where they are able to generate sustainable living.

Here are the stories of how the lives of two women beneficiaries of land distribution are changing for the better as reported by various media:

Mother of five, Sodhi Solangi, can’t stop smiling as she shows me her new eight acre plot of land. Cotton crops are growing and, a little further away, building work is almost finished on a large new house overlooking the fields where her family will soon settle. 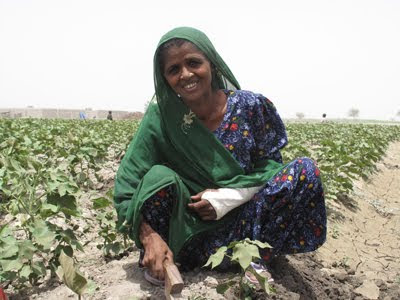 Just a few years ago, 42 year old Sodhi, who lives in Ramzan Village, Umerkot district, in Sindh, Pakistan, was landless. She and her husband used to work on others’ lands, earning a share of the crops as payment. Daily life was a struggle.

“We often had problems”, Sodhi recalled. “Sometimes we had money, sometimes not. It was very hard for us. We’d spend all our days working on someone else’s farm and our children would be at home.

“We wore torn clothes. But now things are very different. When you like something, you can go out and buy it. Before, we would have to ask the landlord to give us money if we wanted anything, but now we have money in our hands and we can buy things whenever we want.”

“Now we have our own land and are working on our own land. It feels so good when we work there. When we used to work for others, we would have to drag ourselves there.”

Her family’s luck changed when Sodhi was awarded eight acres of land, under a programme run by Sindh’s provincial government, which in 2008 began redistributing swathes of state-held land to landless women peasants. The landmark scheme was an attempt to lift more people out of poverty in the province, where more than two-thirds of the population work the land, but where bonded labour is still widely practiced and most land is still held by wealthy and political influential elites.

Sohdi and her family grew wheat and cotton on their new land. And they managed to earn enough profit to buy another eight acres.

“We were so happy when we go our land. Now, things are so different”, said Sodhi. “Whenever we want to eat anything, we can just buy it. Before, we used to eat dal and potatoes. Now we can buy all sorts of things – mangos, even chicken.”

“Everyday, we have a lot of food. It’s like a festival of food for us every time!” she said, laughing.

When the fields are cleared, Nimat Khatoon, a 50-something peasant farmer who has worked for the wealthy owner of these fields since her childhood has something worth the wait: a four-acre slice of land to call her own.

"It's something I couldn't dream of seeing in my lifetime. We're so happy," she says with a toothy grin, as her children play around her home made of wooden slats and a thatched roof.
---
Khatoon's family still owes some 40,000 rupees ($470) to the landlord her family has worked under for generations – a princely sum, which could still take another year to clear – though thanks to her newly acquired land, she's hopeful that for the first time ever, the cycle of debt won't begin afresh next year.

As expected, the rich landlords are fighting back by making threats of violence and by filing legal challenges via local peasants in their employ, to take back land that was in their de facto control. Sharaeefa Gulfazar, a recipient of 4.5 acres of land, told Oxfam's Caroline Gluck: “The landlord sent officials to threaten the women here saying, "We will destroy your homes and take your tractors". He also threatened to send the police to our home”.

The women, however, are also receiving help from various NGOs and activist groups to assert their rights. An example of this is Participatory Development Initiatives (PDI) who are fighting through the courts for the women.

Farm land has long been the main source of wealth in rural Pakistan, and the allocation of land to women is a powerful symbol of women empowerment. Genuine implementation of the good intentions of the Sindh government initiative is an absolute must to send a message in patriarchal society that women deserve higher status in society to ensure a brighter future for all of Pakistan.

Status of Women in Pakistan

Ode to Feudal Prince of Pakistan

Owning Land is a Distant Dream For Many

Agriculture and Textiles Employ Most Indians and Pakistanis

Pakistan At 75: Highlights of Economic and Demographic Progress Since Independence

Pakistan is a young nation with a lot of unrealized potential. As the country turns 75, it is important to recognize that all basic indicators of progress such as income, employment, education, health, nutrition, electricity use, telecommunications and transportation have shown significant improvements over the last seven and a half decades. These improvements can be accelerated if Pakistan can overcome its economic …

Nehru's Secularism Was An Aberration; Modi's Islamophobia is the Norm For India

As India and Pakistan turn 75, there are many secular intellectuals on both sides of the border who question the wisdom of "the Partition" in 1947. They dismiss what is happening in India today under Hindu Nationalist Prime Minister Narendra Modi's leadership as a temporary aberration, not the norm. They long for a return to "Indian liberalism" which according to anthropologist Sanjay…