Citing significant improvements in Pakistan's current account balance, Pakistan's Finance Minister Dr Abdul Hafeez Shaikh has said that his government would not waste its energy on reviving the currently suspended IMF program that began in 2008, or seek a new IMF bailout, according to a report in Pakistan's Dawn newspaper.

Pakistan's decision follows the latest State Bank report of a current account surplus equivalent to 604 Million USD in the second quarter of 2011.

The surplus is the result of rising exports from Pakistan and growing remittances from Pakistani diaspora, the 7th largest in the world.

Pakistan's exports in the first two months of the current fiscal year (2011-12) surged by 20.26 percent over the corresponding period of last year. Exports during July-August (2011-12) were $4,167 million as compared to the exports of 3,465 million during July- August (2010-11, according to a GeoTV report citing data from Federal Bureau of Statistics (FBS).

According to official data as reported by Reuters, remittances rose 40.45 percent to $1.31 billion in August 2011, compared with $933.06 million in the same period last year. 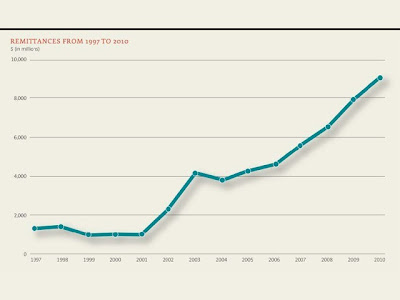 Pakistan has about $18 billion in foreign exchange reserves, according to Dawn News. It's about 6 months worth of imports at the current rate.

Currency traders reacted negatively to the government's decision to part ways with the IMF as the Pakistani rupee hit its second record low against the dollar in two days on Friday, touching 87.92 before firming to 87.75/78 at the close.

Some analysts believe that the timing of the decision to free itself from the IMF is motivated by the ruling party's desire for more spending on populist programs to impress its voters before the coming elections. This is likely to make the budget deficits worse in the absence of IMF's demands for reforms to cut spending and raise revenues to narrow Pakistan's budget deficits to 4.5% of GDP.

Pakistani Diaspora Among the World's Largest

IMF and Pakistan- A Case Study

Here's Pakistan's report card on balance of payments in Jul-Dec 2011 period as reported by Daily Times:

According to the State Bank of Pakistan, overseas Pakistani remitted an amount of $6.33 billion in the first half (July–December 2011), showing an impressive growth of 19.54 percent or $1.034 billion compared with $5.291.43 billion received during the same period of last fiscal year (July- December 2010).

The monthly average remittances for July-December 2011 period comes out to $1.054 billion as compared to $881.91 million during the same corresponding period of the last fiscal year, registering an increase of 19.54 percent.

Pakistani currency (Pak rupee) fell to a record low against US dollar owing to the country’s trade deficit.

Rupee slid 0.3 percent, most since December 27, before Federal Bureau of Statistics published trade data for last six months this week.

Last week, the governor SBP has informed the Senate Standing Committee on Finance, “the likelihood of a sharper fall in foreign exchange reserves is strong in the second half of 2011-12 due to large repayments of external debt, including $1.2 billion of IMF loan, are due in second half.”

SBP officials agreed with the members that in case foreign inflows were not materialised, reserves might fall by $5 billion from current level. It was informed that pressures on foreign exchange reserves and exchange rate have increased, reserves have declined by $1.2 billion up till December 30 ongoing fiscal year 2011-12. Rupee, against the dollar, has depreciated by 4.4 percent up till December 30. SBP is managing excess volatility in Pak Rupee, but is not going against market fundamentals. Timely realisation of planned official inflows is essential for maintaining comfortable level of reserves.

Inflation is declining but still high, trends in cotton and oil prices are severely affecting the external current account.

Net capital and financial flows are inadequate to finance the current account deficit.

Country, foreign exchange reserves have again touched to $17 billion and keeping in view the trade trends, Pakistan trade deficit would not go beyond $14.5 billion.

I'm glad to see that IMF itself is having second thoughts about the Washington Consensus.


First it questioned capital controls, then inequality and fiscal austerity. Is the International Monetary Fund now throwing darts at an even broader area of economic orthodoxy?
In a piece published on Thursday in its flagship magazine, three of the IMF’s top economists take on the “neoliberal agenda” of which critics have long accused the IMF of being a leading practitioner.

Headlined “Neoliberalism: Oversold?”, the article is more a reflection of the vigorous debates under way inside the IMF than an official takedown of the free market policies the fund has long advocated. Its release also comes in the same week in which David Lipton, the fund’s number two, argued for the merits of free trade and globalisation to be sold more forcefully. This comes in a political climate where many candidates and voters are treating the IMF’s traditional call for more open economies with protectionist disdain.
But even the use of the term “neoliberalism” is provocative. It is normally used by critics of the free market economics advocated by Friedrich Hayek and Milton Friedman. A more common usage would be that of this week’s “Socialist Worker” newspaper: “The IMF uses debt as a weapon to force vicious neoliberal reforms onto elected governments.”
The new IMF work examines two specific elements of the so-called neoliberal agenda: capital account liberalisation, or removing barriers to the flows of capital; and fiscal consolidation, or what is now more commonly called austerity.
“There is much to cheer in the neoliberal agenda,” its authors write. “However, there are aspects of the neoliberal agenda that have not delivered as expected” and their work had led to “disquieting conclusions” including that they resulted in increased inequality that undermined economic growth.
In an interview, Jonathan Ostry, deputy director of the IMF’s research department and the article’s lead author, said the new piece was not meant as an attack on “the entire neoliberal agenda or the Washington consensus”. But he hoped it would set the stage for a broader examination of “neoliberalism” that would come out this year.

“What the hell is going on?” Dani Rodrik, a Turkish economist who teaches at Harvard University and is known for his questioning of globalisation’s benefits, said in an interview.
Mr Rodrik, who is profiled in the same issue of the IMF’s “Finance & Development” by one of the neoliberalism piece’s authors, Prakash Loungani, said what has been a persistent change in tone at the fund was welcome. There were also signs the work being done by Mr Ostry and other mavericks in the research department in recent years was seeping into broader IMF policy, as reflected by the fund’s push for debt relief for Greece.
However, Mr Rodrik said, “there is definitely a gap” between the IMF’s research arm and other parts of the institution. “The operational side of the IMF, which is really where things happen, where country programmes are designed, where loan terms are negotiated is typically much more orthodox,” he said. “There the change is slower and is lagging behind the thinking.”