President Obama has honored Dr. Mark Salman Humayun of Pakistani origin with the National Medal of Technology and Innovation at a White House ceremony recently, according to a USC Eye Institute press release. 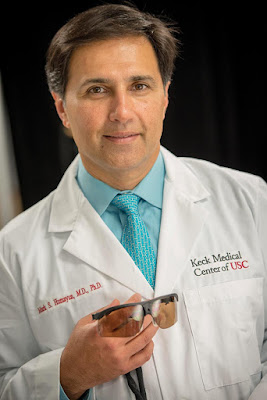 Dr. Humayun's "bionic eye" offers a solution for those who have the inherited retinal degenerative disease retinitis pigmentosa (RP). Known as the Argus II, it uses a camera mounted on special glasses that sends a signal to an electronic receiver with electrodes that are implanted in and around the eye. The electrodes send signals to the retina that stimulate the retina and then these retinal impulses travel through the optic nerve to the brain where they are interpreted as images.

Dr. Humayun's "bionic eye" received approval from the FDA in the U.S. in 2013 and since then the USC Eye Institute has been one of the centers of excellence for patients receiving this implant. Dr. Humayun has trained ophthalmologic surgeons worldwide in implanting the Argus device that has been in use in Europe since 2011 and was also recently approved for implantation in Australia, according to USC Keck Institute.

Born in Pakistan, Dr. Mark Salman Humayun is grandson of Quaid-e-Azam Mohammad Ali Jinnah's personal physician Dr. Ilahi Bakhsh, according to a story by Anjum Niaz of Pakistan's Dawn newspaper.  Dr. Humayun now leads the USC Eye Institute at the University of Southern California in Los Angeles where he is Professor of Ophthalmology and Biomedical Engineering. The Humayun family came to America in 1972. Dr. Humayun received his MD degree from Duke University, a PhD in Biomedical Engineering from University of North Carolina followed by clinical training in ophthalmology at Duke Medical Center as well as the Johns Hopkins Hospital.

The news of Dr. Humayun's achievement comes on the heels of another Pakistani-American Dr. Nergis Mavalwala's contribution to discovery of gravitational waves that has been widely recognized. Mavalvala and her colleagues are credited with developing an ultrasensitive telescope designed to catch glimpses of gravitational waves. Albert Einstein predicted the existence of these ripples in spacetime nearly a century ago, but they haven’t been observed directly yet, according to the Science Magazine. Theoretically a consequence of violent cosmic events—the collisions of black holes, the explosive deaths of stars, or even the big bang—gravitational waves could provide a brand new lens for studying the universe, according to the magazine.

According to the details,  at least 7 people were dead including three children in eastern Turkey after…