Recent World Bank report on student learning in South Asia is depressing. Sri Lanka is the sole exception to the overall low levels of achievement for primary and secondary school kids in the region.  The report documents with ample data from various assessments to conclude that "learning outcomes and the average level of skill acquisition in the region are low in both absolute and relative terms". The report covers education from primary through upper secondary schools.

Buried inside the bad news is a glimmer of what could be considered hope for Pakistan's grade 5 and 8 students outperforming their counterparts in India. While 72% of Pakistan's 8th graders can do simple division, the comparable figure for Indian 8th graders is just 57%. Among 5th graders, 63% of Pakistanis and 73% of Indians CAN NOT divide a 3 digit number by a single digit number, according to the World Bank report titled "Student Learning in South Asia: Challenges, Opportunities, and Policy Priorities".  The performance edge of Pakistani kids  over their Indian counterparts is particularly noticeable in rural areas. The report also shows that Pakistani children do better than Indian children in reading ability.

Here are some excepts from the World Bank report:

Unfortunately, although more children are in school, the region still has a major learning challenge in that the children are not acquiring basic skills. For example, only 50 percent of grade 3 students in Punjab, Pakistan, have a complete grasp of grade 1 mathematics (Andrabi et al. 2007). In India, on a test of reading comprehension administered to grade 5 students across the country, only 46 percent were able to correctly identify the cause of an event, and only a third of the students could compute the difference between two decimal numbers (NCERT 2011). Another recent study found that about 43 percent of grade 8 students could not solve a simple division problem. Even recognition of two-digit numbers, supposed to be taught in grade 2, is often not achieved until grade 4 or 5 (Pratham 2011). In Bangladesh, only 25 percent of fifth-grade students have mastered Bangla and 33 percent have mastered the mathematics competencies specified in the national curriculum (World Bank 2013). In the current environment, there is little evidence that learning outcomes will improve by simply increasing school inputs in a business-as-usual manner (Muralidharan and Zieleniak 2012).

In rural Pakistan, the Annual State of Education Report (ASER) 2011 assessment suggests, arithmetic competency is very low in absolute terms. For instance, only 37 percent of grade 5 students can divide three-digit numbers by a single-digit number (and only 27 percent in India); and 28 percent of grade 8 students cannot perform simple division. Unlike in rural India, however, in rural Pakistan recognition of two-digit numbers is widespread by grade 3 (SAFED 2012). The Learning and Educational Achievement in Punjab Schools (LEAPS) survey—a 2003 assessment of 12,000 children in grade 3 in the province—also found that children were performing significantly below curricular standards (Andrabi et al. 2007). Most could not answer simple math questions, and many children finished grade 3 unable to perform mathematical operations covered in the grade 1 curriculum. A 2009 assessment of 40,000 grade 4 students in the province of Sindh similarly found that while 74 percent of students could add two numbers, only 49 percent could subtract two numbers (PEACE 2010).

I hope that this report serves as a wake-up call for political leaders and policymakers in Pakistan to redouble their efforts with significant additional resource allocations for nutrition, education and healthcare.

Who's Better for Pakistan Human Development?

Myths and Facts About Out-of-School Children in Pakistan

Pasi Sahlberg on why Finland leads the world in education

Pakistan, Bangladesh and Nepal have stolen a march over India in quality of school education.

Data from new research on female literacy show that India’s school education system is under-performing in terms of quality when compared to its neighbours, Pakistan, Bangladesh and Nepal. The research studies changes in female literacy over a number of schooling years.

The proportion of women who completed five years of primary schooling in India and were literate was 48 per cent, much less than 92 percent in Nepal, 74 per cent in Pakistan and 54 per cent in Bangladesh.

These findings, which are part of a forthcoming background paper, were released in a blog-post by New York-based International Commission on Financing Global Education Opportunity (or Education Commission) last week. Justin Sandefur, one of the authors of the paper, said, “This is a simple but powerful signal that India’s education system is under-performing.”

The data also revealed that, female literacy rates went up by one to 15 per cent after completing two years of schooling. Corresponding numbers for Pakistan and Nepal were three to 31 per cent and 11 to 47 per cent respectively. “This implies that schooling is roughly twice as productive at generating literacy for women during the early grades in Pakistan when compared to India. Or, it could also mean that Indian schools are much more lenient about promoting students who cannot read,” Mr. Sandefur said.

For this research, the authors devised a way to measure the quality of education around the world, with a specific focus on girls, using data from nationally representative Demographic and Health Surveys (DHS) — one of the most comparable data sources on living standards in the developing world. “We used data from all countries with DHS data that included the literacy measure,” Mr. Sandefur said. Around the world, female literacy rates are improving. However, it is not clear if that is because of improvement in school quality, the study says. India ranks low in global indices of female literacy as well. If countries are ranked by the earliest grade at which at least half of the women are literate — a proxy for quality of learning — India ranks 38th among the 51 developing countries for which comparable data is available. Indonesia, Rwanda, Ethiopia and Tanzania — all rank higher than India. Ghana is placed at the bottom. According to this study, just seven per cent of female students in Ghana can read after attaining their sixth grade.

Over the years, most countries studied made improvements in the number of girls finishing primary school, which should lead to more literate women. But for girls who don’t finish primary school, the trend is not encouraging: researchers found that little to no progress has been made in increasing basic literacy for the girls who drop out. The report notes, “Millions of women have spent multiple years in school and emerged unable to read a simple sentence” and “it’s not getting much better over time.”

Indians' comments about "PoK" calling it "as backwards as it was in 1947" show their utter ignorance about Pakistani Kashmir known as Azad Kashmir. Unlike Indian Occupied Kashmir held by the force of 700,000 Indian troops, Pakistani Kashmiris are totally free. There are no mass protests nor curfews nor ubiquitous military checkpoints humiliating Kashmiris in in Azad Kashmir. A UNDP report just came out that shows MPI (multi-dimensional poverty that includes income, health, education poverty) is less than half that in India. In fact, India is the second poorest country in South Asia after Afghanistan, according to Oxford's MPI data. "India is home to over 340 million destitute people and is the second poorest country in South Asia after war-torn Afghanistan...In South Asia, Afghanistan has the highest level of destitution at 38%. This is followed by India at 28.5%. Bangladesh (17.2%) and Pakistan (20.7%) have much lower levels" according to Colin Hunter of Center for Research on Globalization
http://www.riazhaq.com/2014/10/multi-dimensional-poverty-index.html


The United Kingdom strongly supports ASER, this is the only citizen-led independent assessment of Education and it is also an important tool for citizen’s accountability. We as DFID have been supporting ASER since its launch years ago, and we will continue to support the cause for better of the society, said Joanna Reid while addressing the panelists.

The number of out-of-the-school children has dropped significantly from 25 million to 22 million according to the government data. However, it’s still not enough, there is a lot more to be done. We should not compromise on access to schools, our main focus should be on improving quality, the education budget was increased this year which is a good sign towards development but still short in achieving targets, from 2.83% of GDP the budget allocation this year was 3.02%, Joanna added.

Education and economic development are correlated with each other, economic growth in Pakistan heavily relies on education, Pakistan has a larger segment of population which is aged between 10 to 24 years according to population Council, 61 million young people can really make a difference if they are equipped with required education and skills, if half of them are not, Pakistan will not be able to meet its workforce needs in the future to continue economic growth, she said.

The ASER meeting was organized by Idra-e-Taleem-o-Agahi with other partners of ASER in Serena Hotel. Key personalities from Federal government Education department, National Assembly, Pakistan Institute of Development Economics and Human Rights Activists were among the Panelists.

UNESCO and World Bank data from 2012 shows Pakistan spends 6% of GDP on education---2% public and 4% private spending as percentage of GDP, according to the Economist Magazine. 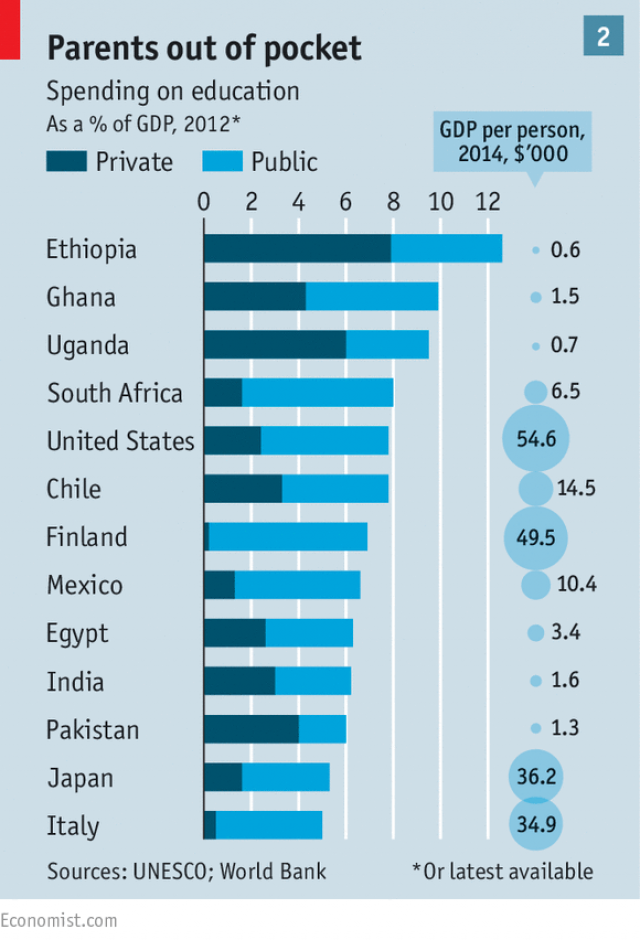 UNESCO and Word Bank data from 2013 shows that 46% of Pakistani kids and 32% of Indian kids reached expected standard of reading after 4 years of school, according to the Economist Magazine. 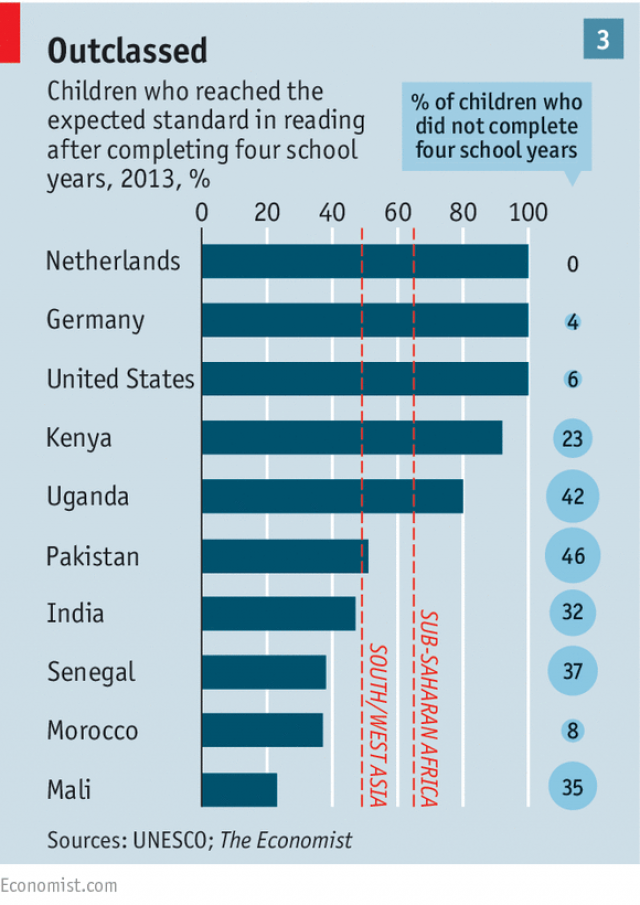