Solar Energy Lights Up Homes, Schools and Factories in Pakistan

“I use the solar light for cooking at night. We save money because we had to buy candles and kerosene before. We also use it to charge our mobile phones.” Marvi, Yousaf Babar Village in Sindh, Pakistan

About 250 schools and 12,000 homes in Pakistani villages have so far been lit by solar lights. The program is funded by the UK's Department for International Development (DfID) to help flood-affected people in rural Sindh and Punjab.

Plan International Pakistan and the Punjab education department have rebuilt 400 schools destroyed by floods, and implemented solar panels in 250 schools that did not have electricity. In addition to the solar panel installation, the DfID funded project also provided water and sanitation, school furniture, school paper, schoolbags and uniforms, sports equipment and health education for 54,000 primary school children.

The solar lights cost about $15 each and give sustainable, free light for up to 10 hours after each charge, and can last for up to five years. The cost is recouped within a couple of months, providing excellent value for money, according to DfID sources. 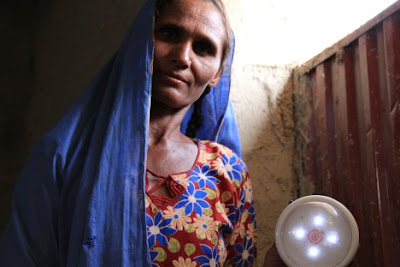 The solar technology is also used for recharging mobile phones, which provide vital communication lifelines in rural areas, enabling people to keep in touch with family and community. The mobile phones are helping reunite displaced families and communities, and helping people to try to get back to a normal life.

“Sales of solar energy panels have increased about 40 per cent compared to winter of last year. Sunshine in Pakistan remains for approximately 10 hours a day, which is enough to produce 1,000 watts per square meter. Producing electricity from the sun is very easy,” the paper quotes Tariq Nurani, a solar products dealer, as saying.

The rapid cost declines and increasing availability of solar equipment are enabling energy-starved but resilient Pakistanis to cope with the twin shortages of gas and electricity.

The smart panel solution, named JS Smart Roshni, will allow SMEs that use Nizam’s solar modules and technical services to benefit from financing of up to PKR10 million (~US$86,500) at a mark-up of 6% from the bank, while reducing the SMEs’ dependency on grid power.

Babbar Wajid, head of product development and business management, JS Bank said: “Our partnership with Nizam Energy reflects our commitment to provide customers with responsible solutions for their energy needs, while creating medium to long-term savings. This initiative will help our clients increase operational efficiency in an environmentally responsible manner, and help reduce load on the national grid.”

In other news, the Government of Sindh Province in Pakistan recently rejected submissions from all four bidders in its tender for 352 solar PV systems to electrify primary health facilities. Meanwhile, in February, the Pakistani regulator issued its tariff determinations for 300MW of solar with tariffs significantly below grid parity, for which Nizam was a co-sponser with Scatec Solar for 150MW worth of projects.

Community-built #hydropower projects lighting up remote areas in #Pakistan, generating 5 to 100 kilowatts of power. Most micro-hydropower projects have a shelf life of up to 20 years but it's extendable. #renewable #energy #electricity https://scroll.in/article/888241/in-pakistans-mountains-community-b... via @scroll_in


Two winters ago was the best winter Zulekha Begum can remember in her 42 years in Swat valley, 150 kilometres northeast of Peshawar, the capital of Khyber Pakhtunkhwa province. “It was the most comfortable winter; our rooms were nice and warm and we had hot water anytime of the day.”


For the first time last winter, her village of Jukhtai, in the idyllic alpine valley, received an uninterrupted supply of electricity thanks to the 65 KW of the micro-hydropower project that the Sarhad Rural Support Programme, an independent development organisation, helped install in their village of 2,300 people.

The Sarhad Rural Support Programme has been working in the Khyber Pakhtunkhwa province since 1989 with the aim of reducing poverty and ensuring sustainable means of livelihood. And since 2004, it has built more than 250 micro-hydro units supplying off-grid communities with cheap, environmentally-friendly and uninterrupted power supply. With financial support from the European Union to produce over 19 MW of electricity, it has benefitted over 570,000 people.

Six years ago, in 2012, the EU (in collaboration with the Pakistan government) started a four-year programme to “revitalise” rural economy and promote renewable energy for sustainable livelihoods in Malakand division of Khyber Pakhtunkhwa province. This was later extended to 2018.

This fitted closely with the work of the Khyber Pakhtunkhwa government, which was also planning on initiating over 350 units to produce 35 MW of electricity benefiting over 700,000 people by 2017.

“The way we work with the community is that the latter provides us with land, labour, time even local material like stone, and earth which comes to 20% of the cost while 80% is borne by the SRSP [Sarhad Rural Support Programme],” said Dildar Ahmad, Sarhad’s district programme manager. The micro-hydropower project at Jukhtai (in Swat), cost Pakistani rupee 8,152,154 ($64,275) and provides connections to 315 households and some shops.


According to the Sarhad Rural Support Programme, the Khyber Pakhtunkhwa government gave them 105 micro-hydropower projects to be completed by December 2018, of which they have completed 90, and the rest are 78% complete. All the EU funded projects were completed by March 2018. Overall, the Sarhad Rural Support Programme says that, since 2009, it “has constructed 332 micro hydro projects, as of July 2017, benefiting approximately 900,000 population in rural areas of Malakand Division and Northern Districts of Khyber Pakhtunkhwa.” (Oddly, the graphic accompanying this claim suggests only 331 projects have been completed.)

ISLAMABAD: The US Embassy represented by Mark Russell, commercial counselor in collaboration with NAT Power Pakistan (Private) Limited, who represent the no. 1 US company, ‘Solar Stik’, who manufactures the world’s top grade portable, mobile solar hybrid systems for military and now through Nat Power for commercial sector specially for the off-grid communities of over a 100 million, who have no power or very little, if any, says a press release.

Most of these communities, which are targeted, by NAT Power and ‘Solar Stik’ are in rural Sindh, Baluchistan, Punjab, KPK, Gilgit Baltistan and now FATA Nat Power’s highly sophisticated team beamed Solar Stik right into the hall, where all the guests were seated. By showing them the products, this created complete transparency as to where these products are made and will be sold in Pakistan through Nat Power.

‘Solar Stik’, the US manufacturers also answered during the Q&A’s session directly to the audience who enjoyed the inter action, which boosted their confidence. This was to give the audience the confidence that if these products which are sold to military conflict theaters round the world, including Middle East, Horn of Africa and Afghanistan. It was the first time the audience could ask the questions to the manufacturer directly.

Chairman of NAT Power Pakistan, Muslim Lakhani, explained their business model and the important features of these products, he said, “if these products can last in Afghanistan for over 10 years you can imagine how long it will last in non-conflict areas, perhaps 15 to may be 20 years or more with some upgrades during the 20 years life cycle, the reason being, the products are rugged, hybrid and operate through artificial intelligence, AI. These products can operate in extreme harsh climatic conditions where the temperatures vary from +60 degrees to -20 degrees. Also for the first time in Pakistan, 24VDC batteries made of Lithium Ion and non-spill able led acid batteries.

Muslim Lakhani, explained their business model, which is not in competition with any company who is already in this business, since there is no one in this space of mobile portable and rugged solar units, all vendors are our clients and we welcome new comers who also want to get into this business. Lakhani further explained that this will create lots of jobs and will help with reducing the circular debt.

Pakistan Textile Industry was celebrating a big milestone with 20% jump in exports in February 2020 when coronavirus struck a heavy blow. Some western retailers canceled orders while others put them on hold as the virus spread to Western Europe and the United States in…