The first US presidential debate of Elections 2020 on September 29 was a very chaotic affair. It was characterized by constant interruptions by President Donald J. Trump and exchange of unprecedented insults with Democratic presidential nominee Joseph R. Biden. Chris Wallace, the Fox News anchor and moderator, found it impossible to bring order in spite of his best efforts. It resembled Pakistani Talk Shows with all the yelling, screaming, drama and insults. Trump attacked India twice during the debate. At one point, Biden said "Inshallah". 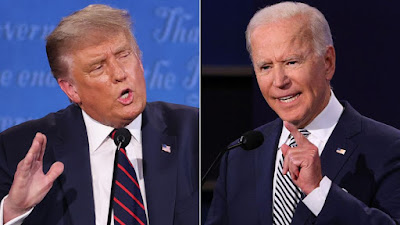 Trump refused to denounce white supremacists and questioned the integrity of the elections.  Trump also attacked Biden’s intelligence at several points during the contentious debate. Biden called Trump a "clown" and told him to "shut up" at one point.

Talking about climate change, Trump accused India of being a leading polluter. About an hour into the debate, Trump said: "China sends up real dirt into the air. Russia does. India does. They all do". There are reports suggesting India has surpassed China as the world's top polluter. Images captured by the Dutch space instrument, Tropomi, show high concentrations pollutants like Nitrogen dioxide, Ozone and other pollutants produced by car traffic, industry and power stations in India, according to a Business Insider report.

About 15 minutes into the debate, Biden used the word "Inshallah" while demanding Trump's tax returns.  Pressing Trump on when the American public would get to see his long-anticipated tax returns, Biden questioned: "When? Inshallah?" "Inshallah" is often considered as a non-committal response by some in the Muslim world.

Lynchistan: India is the Lynching Capital of the World

Is Pakistan's Response to COVID19 Flawed?

Coronavirus, Lives and Livelihoods in Pakistan

The report comes hours after the bipartisan body announced it would implement changes to make the remaining debates less chaotic.

“The Commission on Presidential Debates sponsors televised debates for the benefit of the American electorate. Last night’s debate made clear that additional structure should be added to the format of the remaining debates to ensure a more orderly discussion of the issues. The CPD will be carefully considering the changes that it will adopt and will announce those measures shortly,” the group said in a statement Wednesday.

The announcement came after lawmakers and media figures expressed frustration and exhaustion with the first debates. President Trump frequently interrupted Democratic nominee Joe Biden and also sparred with moderator Chris Wallace of Fox News after he asked him to allow Biden to answer his questions per the rules.

“Mr. President, I’m the moderator of this debate and I’d like you to let me ask my questions,” Wallace eventually said.

“I guess I’m debating you, not him,” Trump responded. “I’m not surprised.”

The CPD has not yet formally announced what specific steps, if any, it will take to ensure adherence to the rules at further debates. Biden and Trump are set to square off again on Oct. 15 and 22, while Vice President Pence and Sen. Kamala Harris (D-Calif.) will have their single debate on Oct. 7.

The Hill has reached out to the CPD for comment.

#Trump Tests Positive for the #Coronavirus. The result came after he spent months playing down the severity of the outbreak that has killed more than 207,000 in the #UnitedStates and hours after insisting that “the end of the pandemic is in sight.” https://www.nytimes.com/2020/10/02/us/politics/trump-covid.html?smi...

Mr. Trump has refused for months to wear a mask in public on all but a few occasions and repeatedly questioned their effectiveness while mocking Mr. Biden for wearing one. Trailing in the polls, the president in recent weeks increasingly held crowded campaign events in defiance of public health guidelines and sometimes state and local governments.

“The president and first lady are both well at this time, and they plan to remain at home within the White House during their convalescence,” the physician, Sean P. Conley, said in a statement without saying how long that would be. “Rest assured I expect the president to continue carrying out his duties without disruption while recovering, and I will keep you updated on any future developments.”

Other aides to the president would not say whether he was experiencing symptoms, but people at the White House noticed that his voice sounded raspy on Thursday, although it was not clear that it was abnormal for him, especially given the number of campaign rallies he has been holding lately.

Mr. Trump received the test result after one of his closest advisers, Hope Hicks, became infected, bringing the virus into his inner circle and underscoring the difficulty of containing it even with the resources of a president. Mr. Trump has for months played down the severity of the virus and told a political dinner just Thursday night that “the end of the pandemic is in sight.”


Mr. Trump’s positive test result could pose immediate difficulties for the future of his campaign against former Vice President Joseph R. Biden Jr., his Democratic challenger, with just 33 days before the election on Nov. 3. Even if Mr. Trump, 74, remains asymptomatic, he will have to withdraw from the campaign trail and stay isolated in the White House for an unknown period of time. If he becomes sick, it could raise questions about whether he should remain on the ballot at all.

Even if he does not become seriously ill, the positive test could prove devastating to his political fortunes given his months of diminishing the seriousness of the pandemic even as the virus was still ravaging the country and killing about 1,000 more Americans every day. He has repeatedly predicted the virus “is going to disappear,” asserted that it was under control and insisted that the country was “rounding the corner” to the end of the crisis. He has scorned scientists, saying they were mistaken on the severity of the situation.

Foreign policy experts expect that #BidenHarris team will be tougher on #India because PM #Modi has made life more difficult for #Muslims in the country while the #Trump administration has kept quiet about changes in #Kashmir. #China #Pakistan #HumanRights https://www.nytimes.com/2020/11/08/world/asia/kamala-harris-india.html
How things will change under a Biden-Harris administration is the big question Indians are now asking. The incoming administration is definitely much more familiar with India. Ms. Harris spent a lot of time in India as a young woman, visiting family and developing a fondness for Indian food and culture.
And Mr. Biden, even before he was President Barack Obama’s vice president, was a champion for India in the Senate, pushing hard for a nuclear deal between the two nations. Mr. Biden has also promised to allow more visas for skilled immigra..., which President Trump drastically reduced, and Indian workers could benefit enormously from that.
But foreign policy experts expect that the Biden-Harris team will also be tougher on India. They say that the policies of the Indian prime minister, Narendra Modi, have made life more difficult for Muslims in the country, and while the Trump administration has kept quiet about changes in Kashmir and the passage of a new, blatantly anti-Muslim citizenship law, Ms. Harris and Mr. Biden are likely to be more critical.
Ms. Harris has already indicated that she is concerned about the way India has tightened control over Kashmir, a Muslim-majority territory that is disputed between India and Pakistan. People who know her well expect her to speak up more.
“Kamala is a very strong personality who feels very strongly about certain issues like human and civil rights,” her uncle G. Balachandran, said by telephone from his house in New Delhi on Sunday morning. “She may say things if she feels India is going against humanitarian rights.”

Joe Biden had come out in support of Kashmiris and had compared the plight of Muslims in Kashmir with that of Rohingyas in Bangladesh and Uygar Muslims in China.

In a statement published on June 2020, around 10 months after India revoked Article 370 of the constitution, Biden had asked New Delhi to restore the rights of the Kashmiris.

"In Kashmir, the Indian government should take all necessary steps to restore rights for all the people of Kashmir. Restrictions on dissent, such as preventing peaceful protests or shutting or slowing down the Internet, weaken democracy," the statement read.

According to experts have keenly watching Pakistan's foreign policy, think it will be good news for Pakistan if Joe Biden takes oath for office at the White House. Joe Biden can give a new dimension to relations with Pakistan in his foreign policy. In such a situation, it is hoped that during Biden's tenure, relations between Pakistan and America will be better than today.

Talat Masood, a retired military lieutenant general and a senior analyst for political-military affairs, said that it is not likely that US relations with Pakistan will be fully corrected after Biden becomes US President. We should not live in this hope at all. He said that Biden will restore the dignity of all international organizations. This will help Pakistan

Excerpts of "A Promised Land" by Obama:

“Expressing hostility toward Pakistan was still the quickest route to national unity (in India)”.

"(Manmohan) Singh had resisted calls to retaliate against Pakistan after the attacks, but his restraint had cost him politically. He feared that rising anti-Muslim sentiment had strengthened the influence of India’s main opposition party, the Hindu nationalist Bharatiya Janata Party (BJP)"

"Across the country (India), millions continued to live in squalor, trapped in sunbaked villages or labyrinthine slums, even as the titans of Indian industry enjoyed lifestyles that the rajas and moguls of old would have envied".


"Violence, both public and private, remained an all-too-pervasive part of Indian life”.

Stanford University has ranked 243 Pakistani scientists among the world's top 2% scientists for 2019.  Among them are 81 Pakistani professors who are recognized in the lifetime research work list of 160,000 scientists.

Amir Husain, a Pakistani-American AI expert, has started a defense-focused artificial intelligence company, according to builtinaustin.com.  Amir Husain's AI company SparkCognition has been building artificial intelligence and machine learning (AI/ML) software for its various clients since 2013. After closing on a $100 million Series C round last year, the company claims to be “one of…