I was a little child growing up in Karachi when the news of JFK's assassination was received with great shock and extreme sorrow in Pakistan. That was 50 years ago today. Just a couple years earlier in 1961, Pakistan's President Mohammad Ayub Khan had  made a successful state visit to the United States. He was warmly received at Andrews Air Force Base near Washington DC by US President John F. Kennedy and First Lady Mrs. Jacqueline Kennedy.


I saw the pictures of President Ayub Khan meeting with the US President John F. Kennedy as did other Pakistanis. There were also many photographs of young JFK and his beautiful family splashed across the front pages of major Pakistani newspapers during and after the visit. The sudden loss of the young American president in 1963 was deeply felt as Pakistanis viewed images of his beautiful young widow and two little children mourning for their loved one at his funeral.

US-Pakistan ties were extremely close in 1960s. President Ayub was extended the rare honor of being welcomed by the US President and the First Lady at the airport when the PIA airplane carrying him landed in the United States. He was also given the privilege of addressing a special Joint Session of the US Congress where he received standing ovation. Later, he rode an open top car in a ticker-tape parade in New York City with tens of thousands of Americans lining the parade route and cheering him.

US followed up the visit with a massive assistance program which helped bring about the Green Revolution in Pakistan. The world's largest continuous irrigation system was built along with huge dams with US aid in 1960s. In addition, there was a major industrialization program started under state-owned Pakistan Industrial Development Corporation (PIDC) with US help.

"The manufacturing sector expanded by 9 percent annually and various new industries were set up. Agriculture grew at a respectable rate of 4 percent with the introduction of Green Revolution technology. Governance improved with a major expansion in the government’s capacity for policy analysis, design and implementation, as well as the far-reaching process of institution building. The Pakistani polity evolved from what political scientists called a “soft state” to a “developmental” one that had acquired the semblance of political legitimacy. By 1969, Pakistan’s manufactured exports were higher than the exports of Thailand, Malaysia and Indo.... Though speculative, it is possible that, had the economic policies and programs of the Ayub regime continued over the next two decades, Pakistan would have emerged as another miracle economy." 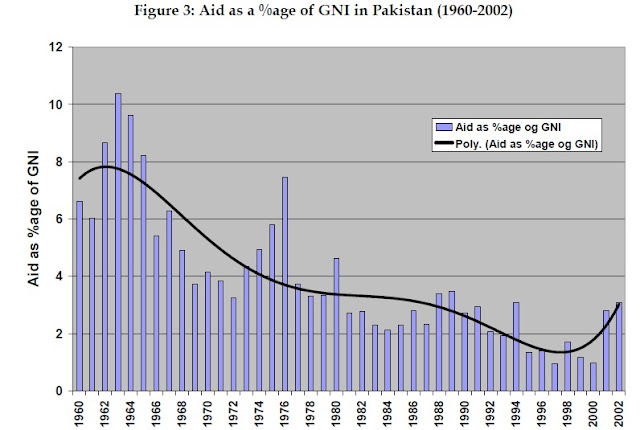 The decade of 1960s is called by economists as Pakistan's Golden Sixties. It was the result of good governance and significant help from the United States at the height of Cold War.

Both US and Pakistan still have close ties but these are marked by significant mutual distrust. People of goodwill on both sides can help reduce some of this mistrust to improve relations. President Kennedy said  in his 1961 inaugural address: "Ask not what your country can do for you; ask what you can do for your country". It is still as applicable to both US and Pakistan today as it was when he said it.

Here's a video of President Ayub Khan's 1961 visit to the United States:

Can Pakistan Say No to US Aid?

Chinese Do Good and Do Well in Developing World

Can Chimerica Rescue the World Economy?