A number of Pakistani economists and newspaper columnists are fretting about what they call "Pakistan's Debt Crisis". They claim that Pakistan's national debt has risen dramatically over the last 8 year. Putting in perspective, it seems to me that they are raising an unnecessary alarm. While it is true that Pakistan's total external debt has increased by about 10% since 1999, it is also true that Pakistan's GDP has more than doubled.
Here are the facts:
In 1999 Pakistan’s total debt as percentage of GDP was the highest in South Asia – 99.3 percent of its GDP and 629 percent of its revenue receipts, compared to Sri Lanka (91.1% & 528.3% respectively in 1998) and India (47.2% & 384.9% respectively in 1998). Internal Debt of Pakistan in 1999 was 45.6 per cent of GDP and 289.1 per cent of its revenue receipts, as compared to Sri Lanka (45.7% & 264.8% respectively in 1998) and India (44.0% & 358.4% respectively in 1998).
Most recent figures in 2007 indicate that Pakistan's total debt stands at 56% of GDP, significantly lower than the 99% of GDP in 1999. It also compares favorably with India's debt-to-GDP ratio of 59% and Sri Lanka's 85% in 2007. From being the highest debtor nation in South Asia, Pakistan has, in fact, become the lowest debtor nation in its region and achieved economic growth rate of about 7% a year during the last 6 years.

Here's a Nation report on total loans and grants for Pakistan since 1985:

Pakistan received over $72.26 billion in the shape of grants and loans from different countries and international financial institutions during 1985 to June 2012.

During this period, 24 countries and 13 different global lending agencies gave loans of over $59.24 billion to Pakistan while 32 states and 13 financial organisations lent country over $13.02 billion in the shape of grants. Cash received against IMF stand-by programme is not included in these figures, it has been learnt.

Here's a BR story on Pak debt repayments since Year 2000:

Pakistan has repaid $10.3 billion between 2000 and 2011-12 to various bilateral and multilateral donors, excluding the International Monetary Fund (IMF). Data obtained by Business Recorder showed that actual payments from 2000-01 till 2011-12 pertaining to loans that were signed after July 2000 stood at $10.37 billion: total loans amounted to $5.7 billion, $4.45 billion was interest and commitment charges were $157 million.

How India’s Debt Could Kill Its Growth

India is taking a series of aggressive steps to reduce the mountain of bad debts weighing down its banks and threatening to derail the world’s fastest-growing large economy. A look at the crisis in six charts.

India is taking a series of aggressive steps to reduce the mountain of bad debts weighing down its banks and threatening to derail the world’s fastest-growing large economy.

India’s parliament last week passed a law empowering its central bank to force some of the country’s largest companies into bankruptcy proceedings. The move follows last year’s overhaul of the bankruptcy code, another attempt to make it faster for creditors to get their money back in a country notorious for drawn-out insolvency proceedings.

India’s efforts come as most of its state banks are struggling with extremely high levels of bad debts, which has dented their ability to make new loans. This, in turn, has pushed down the level of investment to a 13-year low and led economic growth to slow.

Below are six charts illustrating the scope of the issue facing the world’s fastest-growing large economy:

Bad loans are piling up

Indian companies borrowed at record levels a decade ago when the economy was booming. But when the 2008 financial crisis hit, many struggled to find the demand they had anticipated, and started falling behind on their loan repayments.

Last year, more than 9% of all bank loans were deemed nonperforming, meaning that repayments were overdue for more than 90 days. That is a significantly higher ratio than in the U.S. or in other so-called Brics—a group that includes the world’s largest developing countries—with the exception or Russia. 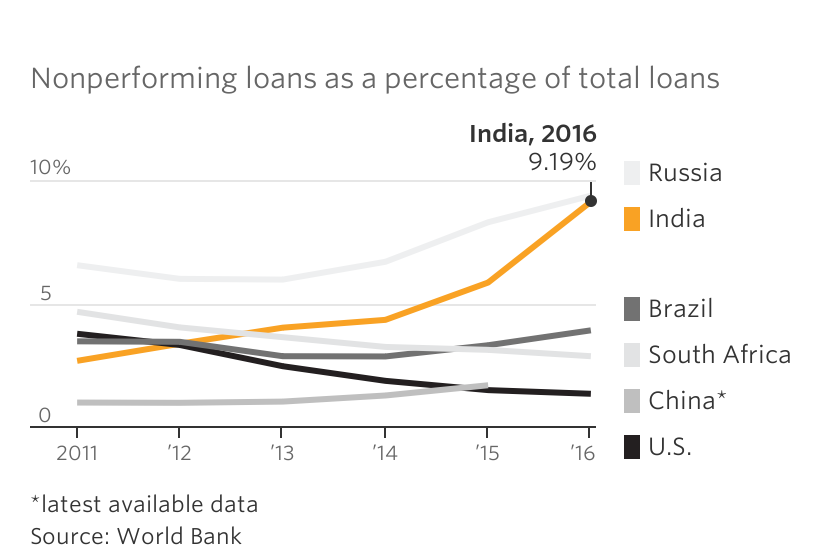 Compounding the issue, India’s state banks—which account for the lion’s share of the country’s banking sector—may have twice the amount of problematic loans on their books than currently reported, according to Credit Suisse estimates.

The investment bank puts that ratio at above 20%. That number includes restructured loans (loans whose repayment date or amount have been modified because the borrower struggled to repay) and problematic loans not recognized as such by banks (for instance, old loans that are being repaid with new loans), Credit Suisse said in a report released earlier this year. 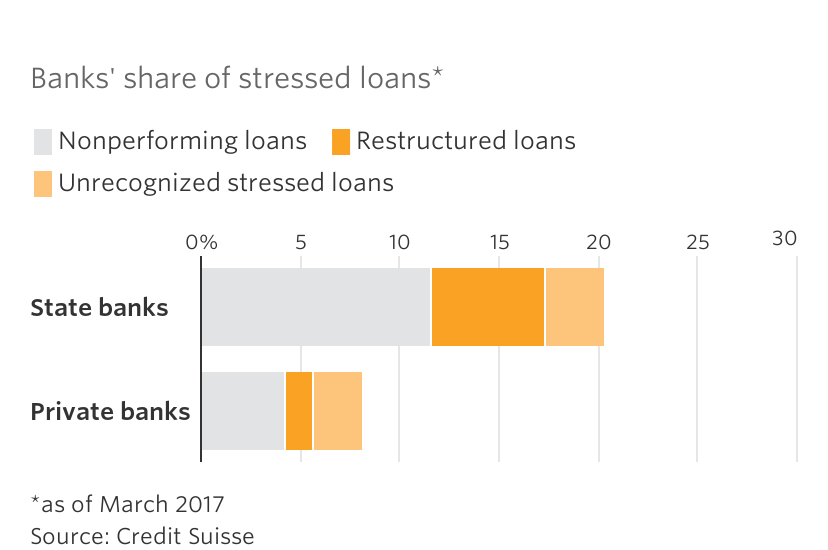 Lending growth is grinding to a halt

As bad debt piles up on their books, state banks are less inclined to make new loans. Private banks with better balance sheets have stepped in to lend more, but they represent only a fraction of India’s banking sector.

Overall, when adjusting for inflation—which averaged 4.5% in the fiscal year ended March—credit growth turned negative in the past financial year, and hit its lowest rate in 23 years, according to India’s finance ministry. 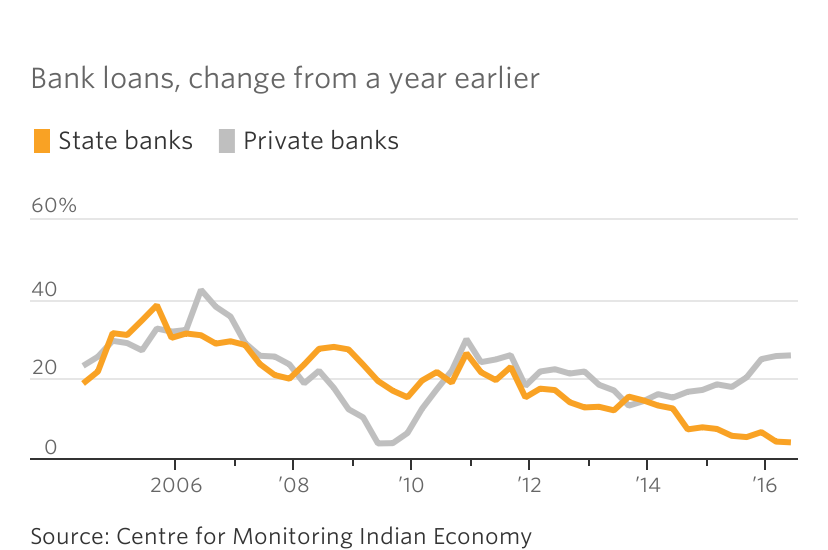 India’s central bank has tried to help boost lending growth by dropping its key interest rate by 2 percentage points since early 2015, but banks have responded with a measly 0.65-point cut in their base lending rate. 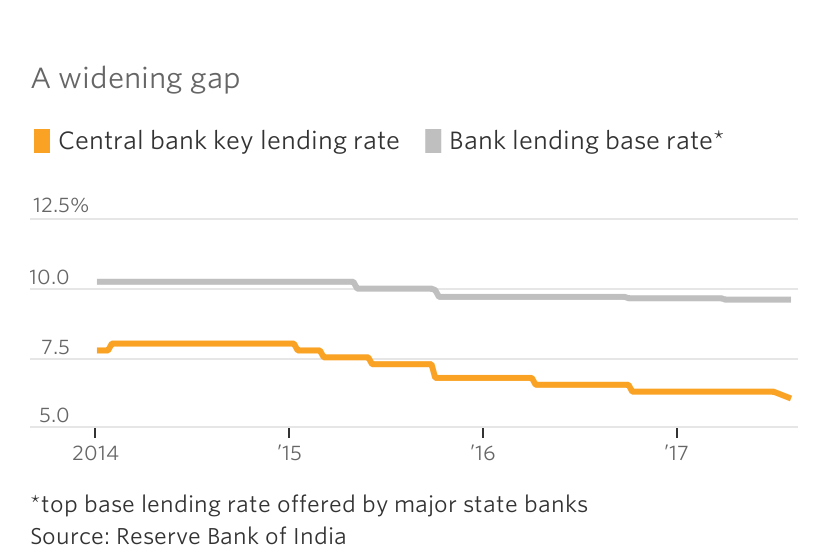 As India’s state banks are reluctant to lower rates and lend, even healthy companies can’t borrow as much money as they would like to build or buy things.

As a result, corporate investment as a percentage of India’s GDP has fallen by more than 7 percentage points in the last five years, reaching a 13-year low last year. 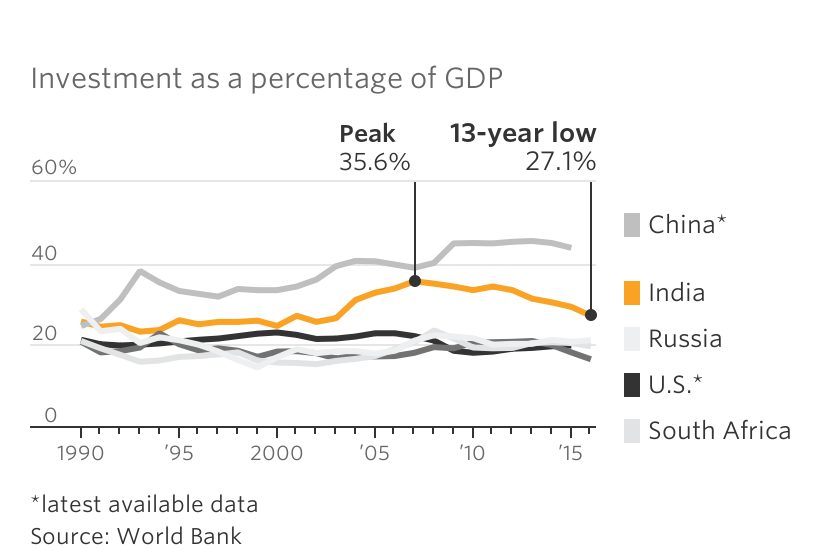 Lackluster lending and investment have started to drag down the economy. Last year, gross-domestic-product growth slowed by a percentage point to 7.1%, and shrank by another point again in the first quarter of this year, as manufacturing, agriculture and construction all contracted. 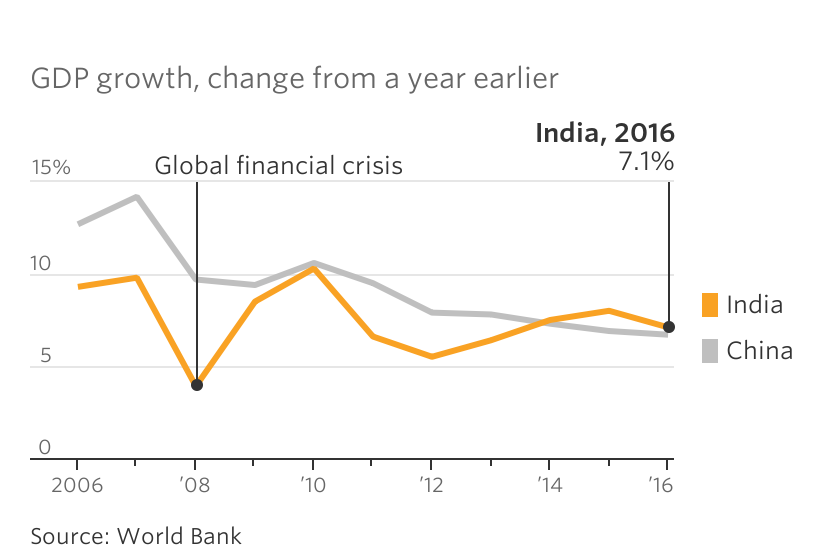 Forensic audit of Nawaz Sharif family's assets has put its value at $820.8 Million, according to Broadsheet Award ordered by arbitrator Sir Anthony Evans. It was revealed in documents revealed by Broadsheet LLC and Pakistan government. The forensic audit was conducted by Stroz Friedberg audit firm based in the United Kingdom. It was hired by Facebook to conduct forensic audit of…

National Geographic's Paul Salopek recently came upon a site in Pakistan's Salt Range where Muslim scientist Abu-Raihan Al-Biruni accurately measured the size of the earth in the 11th century. In it, Salopek sees the revival of the Islamic Golden Age. He characterizes the ancient Silk Road of as "dynamic but collapsed experiment in multilateralism". He thinks the revival of the Islamic Golden Age is…