Thousands of protesters and dozens of civil rights lawyers from ACLU and CAIR flocked to San Francisco International Airport (SFO) to free Muslim travelers detained by the US Customs and Immigration Service after President Donald Trump's Muslim Ban executive order over the weekend.

Silicon Valley companies rely on technology talent from many Muslim nations around the world. They also do significant… Continue

Why did President Donald Trump bar entry of citizens of 7 Muslim majority nations (Iran, Iraq, Syria, Libya, Sudan, Somalia and Yemen) for 90 days? Will it extend to Pakistan and other Muslim majority countries in the future? What message does it send to world's 1.5 billion Muslims, including American Muslims?…

India, often described as the world's largest democracy, is home of 18.3 million slaves, the highest number of people trapped in modern slavery anywhere in the world, according to Global Slavery Index 2016 report.…

When the Trump White House press secretary Sean Spicer found himself being barraged with unpleasant US media questions at his first press briefing today, he called upon Pakistan-obsessed Indian-American Raghubir Goyal to ask a question. 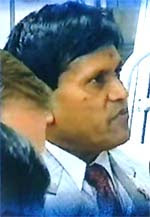 What tone did President Donald J. Trump set in his inauguration speech on Jan 20, 2017? Can Trump simultaneously take on the US establishment, friends and foes all at the same time? How will he browbeat US businesses to stop offshoring of manufacturing and jobs? How will he "eradicate radical Islamic terrorism" without the… Continue

Economic Inequality in India and Pakistan

Top 1% of Indians own 58% of wealth in India, according to a recent report by Oxfam as published by Wall Street Journal.  The report said the global average for wealth ownership of the top 1% is 51%.…

"Ulat Dunya Kee Sair", my friend Ali Hasan Cemendtaur's latest travelogue written in Urdu, was launched on January 15, 2017 at an event organized by Urdu Academy of North America, a Silicon Valley-based group dedicated to the preservation and promotion of Urdu language in the United States and Canada. The travelogue tells the story the author's travels to the world Down Under (appropriately translated by the author in Urdu as "Ulat Dunya), specifically three southern hemisphere nations of… Continue

Why are Indian soldiers publicly speaking out against poor food and airing other grievances on social media? How is India's massive defense budget spent? Why do Indian soldiers lives are almost a decade… Continue

Karakoram is the most magnificent and captivating area in Pakistan. A great attraction for adventure freaks and tourists and definitely a feast for the senses; Pakistan's northern mountains call for an open spirit of adventure and bring the pleasure of experiencing indeed the most picturesque mountain scenery in the world. Such is the setting of Karakoram Range, this remainder of a prehistoric ice age, "the third pole," with sizeable glacier systems and the substantial  concentration of…

Altaba, the new name for Yahoo after its deal with Verizon, is currently the name of a Pakistan-based company spelled as Al-Taba, according to the New York Times. Is this plagiarism?…

What is Om Puri's Legacy? Will he be remembered first and foremost as an accomplished actor? Or as a vocal peace activist pushing for better India-Pakistan ties through greater cultural contacts? Why was he so viciously attacked by right-wing Indian media? And mightily harassed by… Continue

Youth are ready and willing to embrace death, the Indian report

The Indian Army formed after the atrocities and violent protests in Kashmir Valley in an investigative report which appeared conscious of Modi put them away.

Did the Obama administration enable ISIS, also known as Daesh, to unleash its reign of terror in Iraq and Syria? Have the policies of successive prior US administrations contributed to rising wave of global terrorism today? Is the American filmmaker Oliver Stone right when he says "we are not under threat. We are the threat"? Let's examine answers to these questions in light of available facts and…

Pakistan in 2016: Economy, Security & Relations With India, US

Did Pakistan’s internal security improve in 2016? If do, how? And by how much? How was it done? By Zarb e Azb military operation? Did Pakistan implement the National Action Plan to address extremism and radicalization in society?…