Should Pakistan Tell US Where to Shove its Aid?

"Aid only postpones the basic solutions to crucial development problems by tentatively ameliorating their manifestations without tackling their root causes. The structural, political, economic, etc. damage that it inflicts upon recipient countries is also enormous.” These words were written in a letter to UN to refuse aid by Finance Minister Berhane Abrehe of Eritrea which is the…

Citing significant improvements in Pakistan's current account balance, Pakistan's Finance Minister Dr Abdul Hafeez Shaikh has said that his government would not waste its energy on reviving the currently suspended IMF program that began in 2008, or seek a new IMF bailout, according to a report in Pakistan's Dawn… Continue

Managing Droughts and Floods in Pakistan

Pakistan has increasingly been suffering from cycles of severe droughts followed by massive floods in the last few years. This recurring pattern of shortage and excess of water gives us a preview of the growing challenge of climate change. This situation calls for a comprehensive water management effort to deal with a potentially existential threat to Pakistan. 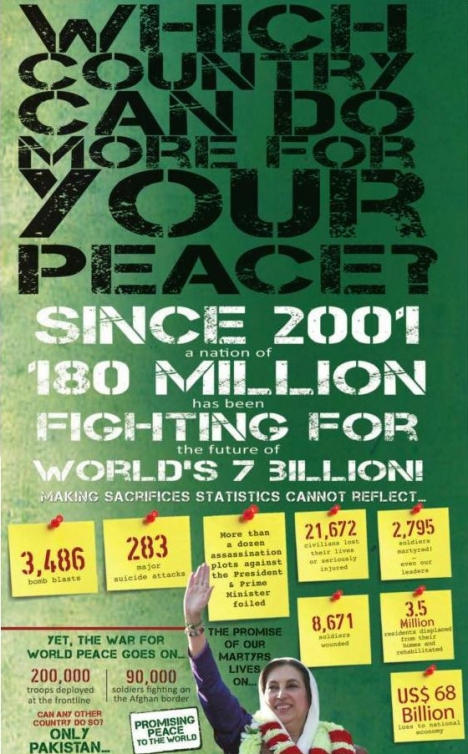 Here's an Express Tribune description of the ad:

While Fareed Zakaria, Nick Kristoff and other talking heads are still stuck on the old stereotypes of Muslim women, the status of women in Muslim societies is rapidly changing, and there is a silent social revolution taking place with rising number of women joining the workforce and moving up the corporate ladder in Pakistan. …

First, none of the terrorists who carried out the 911 attacks on the United States were from Pakistan.

Second, the former Pakistani President Musharraf condemned the 911 attacks and quickly allied his country with the United States in the coalition to fight the US-led "global war on terror".

Wikileaks on The Gangs of Karachi

Here are some excerpts from Wikileaks on the "Gangs of Karachi":

Summary: The police in Karachi are only one of several armed…

Nearly 5 million Pakistani emigrants make up the world's 7th largest disapora, according to the World Bank Factbook 2011. Adding the foreign-born children of these Pakistani emigres to the tally pushes the total figure up to about 7 million. The top five nations that the Pakistani diaspora calls home include the United Kingdom (1.2 million), The Kingdom of Saudi Arabia (1.2 million), the… Continue